At the beginning of April, I had the opportunity to visit LDS author and BYU professor, Aaron Hawkins (and poo poo to myself because by waiting so long to write about this, I have lost the little paper with my notes! Well, I will do my best to remember). Aaron Hawkins is the author of the young adult novel The Year Money Grew on Trees as well as two technical books on electrical and computer engineering and optofluidics (whoa).  I got to his office on campus a little early, so he found me waiting at his door when he arrived. He was very cordial, and welcomed me in with a big smile.
That is one thing that I noticed through the whole visit; he always had a smile (in a very nice, positive sort of way, not in a creepy way). The first thing he mentioned to me was this blog! He had followed the link at the bottom of the email I had sent him and had read at least one post. He told me that he was impressed with my blog, I probably blushed, but I know that part of me was a little nervous that a published author, one of these great people that I visit, actually read what I have been writing, and might even read what I write about him! (Sorry, Brother Hawkins, if you were waiting! But here it is finally.)  The post that he commented on in particular was the one about Hans Christian Andersen. Part of that post mentions my visit to Solveng, CA to see the Hans Christian Andersen museum during my full-time mission for The Church of Jesus Christ of Later-day Saints. At that time I was living in nearby Santa Barbara which is where Aaron Hawkins spent some of his many college years, attending UC Santa Barbara (we were not there at the same time though, in case you were wondering).

-AAH! I just found my notes! My daughter didn't eat the paper like I suspected! (Well, she is a baby.) 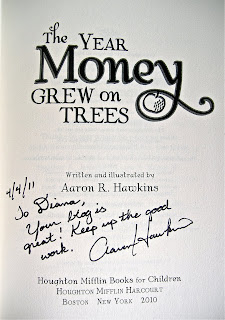 Aaron Hawkins was at UC Santa Barbara for seven years (or perhaps some of that time was shared with the CA Institute of Technology). Now he is here in Provo with his wife and children, teaching electrical engineering at BYU! When I asked how, as an electrical engineering professor, he came to write a young adult fiction novel he explained that he was influenced in two ways: one was the challenge he gave himself in light of the fact that his father was working on a book; two was that writing the book The Year Money Grew on Trees would be a sort of personal history. He confessed that he had not been a particularly diligent journal keeper while growing up; it had seemed so ordinary, he said. So his book ended up being a 70%, time condensed, personal childhood history, with a little tweaking. And it's wonderful! It is very cleanly written and the characters are endearing. The themes of hard work, resourcefulness, diligence, and family run throughout. And if you ever wondered how to take care of an apple orchard, you will learn it all in this book.
Of his writing method, Aaron Hawkins is an outliner through and through. He said that he is not one to just sit down and write with no concrete thoughts of where the story is going; he lays out the beginning, middle, and end first. Concerning more books, he does have a couple of other fiction stories that he has either already written or has a mind to write. At the time of this visit he was in the process of trying to get one published, mentioning that publishing is a tough process and that he is glad that he didn't know at the beginning what he knows now because he wouldn't have had as much hope! He also does not want to be a sell-out like it seems so many authors are doing these days; simply writing books that appeal to the current trends in order to make money. I believe, after I commended him for his integrity (and I agree with him too), that I said it was good that he has his full-time teaching job! But happy day, I just discovered that he has a new YA fiction novel coming soon, titled Big Rock. Way to go, Brother Hawkins! I wish I could remember more from my visit with him, but I do know that it was enjoyable, informative, and that Aaron Hawkins is a very nice, amiable person whom you should meet -in fact, he will be at the BYU Festival of Books on June 4th (at least I hope so! He was surprised when I mentioned it to him, but he is there on the list and the bookstore lady said that she asked him so... let's cross our fingers that he comes)!