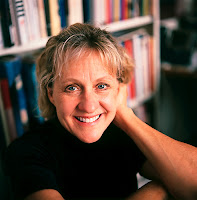 A couple of days after my visit with Aaron Hawkins, I had the chance to visit with LDS, illustration professor Bethanne Andersen. I like her. She is peppy and fun and I wish that she was related to me! I had been trying to meet with her for a little while, but she is a very busy lady. Though she teaches at BYU, she lives in Boise, Idaho and flies down every week for work! Now that must tell you that she loves what she does, and it was plain to see. When we finally met up, she welcomed me into her office with gracious words and a glowing smile and it all felt like a hug to me. I had a few questions for her and she even had some for me! I appreciated that very much, it felt like she was genuinely interested in me and my aspirations. We talked about illustration and family and being published.
I brought a book for her to sign, Ten Queens, written by Milton Meltzer (with whom she also illustrated another book, Ten Kings) and she told me that he was a very nice man. She then shared an experience: one day she was "haunted" by thoughts of Mr. Meltzer and decided that she should give him a call. When she finally did, she learned that he had just passed away. It is very interesting how the Spirit works! At some point in our conversation I explained that this book, Ten Queens, was one that I had had my eye on for many years. I first discovered it when I worked at the specialty toy store in Virginia. It was one of those books that grabbed my attention each time I passed it. I believe that I read it all, in timely portions, there in the store while working. It was one of the many books that I wanted to own, but decided that I had better save my money instead. So all these years later, as I began these Book Adventures, I learned that that book from long ago was illustrated by an LDS woman who works right here on campus (oh how I have loved those discoveries)! I managed to find a hardcover edition on eBay (I only found paperbacks at all other places I had looked), then emailed Bethanne for a visit. When I laid my book on her desk for her to sign, she confessed her wish that she could redo her older works because she feels that she has come a long way since (Ten Queens was published in 1998), but isn't that the way of it? I think we all feel that way in somethings, though having whatever those things are, out there in the world, might make the redo wish that much stronger. It is good to be able to see our progression though, and besides, I bought her book of old illustrations and I love it! Her style is almost wistful, and captures the heart of meaning from text very well. Her choice of colors and lines blend with whichever story they are accompanying.

Bethanne Andersen has illustrated at least 11 books and has worked at BYU for 14 years. She told me that when she was a student, there had been no illustration program at BYU, so she ended up going to New York to study (during my previous visit with her fellow illustration professor Robert Barrett, I learned that Bethanne still knows her way around NY like a pro). At the time, though she was a wife and mother, her children and husband supported her dream to become an illustrator. During her telling of this, she was very encouraging of me and my creative dreams. I am a wife and mother too (and older in my school pursuits like she was) and she said some very kind and motivating things. She reminded me that when you start out, you are at the bottom, and when you send your work out into the world, if and when it is rejected, it just puts you right back where you are; you can't get any lower, you can only go up. And you will go up, if you keep trying. Concerning writing, she explained that when your manuscript is sent to a publisher, the publisher will choose a complimentary illustrator; you don't need to worry about it. Along with this, she advised to be flexible. Do not think that your story HAS to be paired with so-and-so's pictures or with your own pictures. Trust the publisher and just let your book get out there (she did also tell me about a man who HAD to have his own illustrations with his story and that eventually, after so many years, he finally did get his way. That is a bit of a gamble though).
As she signed my book (and drew a picture!), she told me about her newest publication, Louisa: The Life of Louisa May Alcott, written by Yona Zeldis McDonough. She then reached behind her chair to a folder and pulled out two postcards for me to keep. They were both of the same image, an illustration done by Bethanne of Louisa curled up, nestled into to the curve of a giant hound. She explained that this was from the new book, concerning a time when six year old Louisa had run away from home, later to be comforted by a large dog on whom she fell asleep. In the illustration, the largeness of the dog compared to the littleness of Louisa deepens the sense of security and warmth she must have felt. Along this line, I discovered recently that the Springville Museum of Art will be exhibiting a collection of Bethanne Andersen's original Louisa May Alcott illustrations during September to mid October. I am very excited for this!
Our time was signaled at an end when Robert Barrett entered the office for a meeting that was about to occur. I thanked her very much (also saying hello to Brother Barrett) and went out the door clutching my book with the two pretty postcards tucked under the cover. I hope that I have occasion to meet Bethanne Andersen again; she is a wonderful lady!