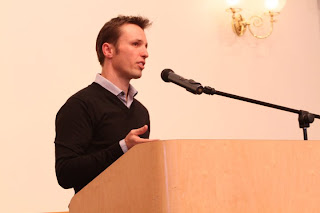 Waaaay back on Saturday, March 26th, Provo City Library hosted an awesome author lecture featuring Markus Zusak. This was his first time coming to the states and he thoroughly enjoyed himself. The event started at 6:00 PM so I walked over to the library at around 3:00 PM. I was the third in the line for those with tickets. I sat down, pulled out my copy of Zusak's book, The Book Thief (jacket-less of course), and commenced the official wait. A little while into this wait, the lady sitting in front of me divulged that she was expecting seven people to join her in line later. I was a little peeved, truth be told, but oh well, at least I was still near the front of the line (which super-paid off later on).
Eventually, the multiplied gaggle of women in front of me, myself, and those behind, were let loose to flood into the upstairs ballroom (yes, a library with a ballroom, is that not the coolest?). I waited for my raffle ticket at the door (as one is supposed to do at these type of events) and found a seat front row, a little to the right (towards the entrance door, which I knew was my immediate goal when the presentation was fully over because of my preparation experience in the Brandon Mull lecture just the week before). The room became absolutely packed. Women (and a smattering of men) of all ages over twelve (because under-twelves were not allowed) awaited the beginning of the presentation with bated breath (not baited, yuck). No. Actually at this point in the evening their breath was coming out at a normal, if not full force, rate (due to the immense excitement of seeing and hearing a young, Australian, published man-author who has written among other things, a little girl's heart-wrenching story of love and loss). I noticed that the room had been nicely and cleverly decorated over our heads with strings of small, clear, round bulb lights interspersed with clothes-pinned playing cards (representative of Zusak's book, I Am the Messenger -the cards, not the lights). When the invisible clock struck an imaginary 6:00 PM, Markus Zusak was given a short introduction (it was said of his books "[They have a] common thread of an individual rising above challenges") then took to the stage amid an uproar of applause and "Woo-hoo's". After that died down, this was the point that the breath became bated, waiting for his Australian first words. "Hi, everyone". Then he proceeded to say that he wanted to live here. I'm sure over half of the women swooned (good thing they were sitting down).

From here until the end of the lecture, I will simply type from what is scribbled in my tiny notebook (I hope that this isn't stepping over some sort of no-no line!).

Concerning having such a large and eager audience he said, "you can't believe how that makes me feel, you could be home watching TV." He was very very touched by this fact so he told us about his first library experience (in Australia [This PCL visit was his first US trip]). No one came, but the librarian made him stay and read to her. He told us that as an author, "you're desperate starting out". To illustrate this he related another story (by the way, he confided in us by telling these stories. He said that he felt so comfortable with this audience. He told us things that he doesn't normally tell. How special!) about his book Underdog (which has not been released in the US). While awaiting the release of this book, he kept stopping by the nearby little bookshop to see if it was there. He went one day in his rugby wear (he was the coach) which he described as "the perfect bank robber's outfit". After about a week of this, the little shop lady (a little lady in a little shop) approached him and asked what he wanted. Markus Zusak told her that he was looking for the Underdog book but didn't tell her that he was the author. She told him to come back tomorrow which he did. She showed him to where her new shipment was and opened the box in front of him. She found the book he had been looking for everyday and handed it to him. He confessed to her that he didn't want to buy it, he had just wanted to see it. He told us that he had felt sorry for her there on her knees. She then realized that he was the author and later got revenge on him. she said, "oh, you're the local author. Let's have a signing and book launch." Markus thought, "who do I know? Or who do I want to come?" he ended up inviting his rugby team. The Thursday night of the book event, the team poured into the shop. The bookshop owner was more clever than Markus ever gave her credit for. She had a box of his books and next to it -a box of beer. The rugby team ran passed the books and right to the beer. The whole team then asked, "Can we come here every Thursday?"
The next story was about revenge on his brother. He dedicated it to a good friend in the audience, Laura McNeal (author of the YA novel, Dark Water), who came from CA to see him.
When Markus Zusak was a boy, his big brother was violent to him (like many big brothers apparently are to their younger siblings). This brother was two years older and would punch Markus for no reason sometimes saying, "I was bored" as an explanation. (My interjection here. There is something in my notes here: "I'd have to pay imagination that he came up with it. Psychological damage." I can only guess at what he meant and what I was actually trying to scribble down. Maybe Markus Zusak has the psychological damage that his brother caused to thank for his own imagination? Anyway, to continue.) After school Markus would watch shows like I Dream of Genie, Bewitched, and Happy Days while eating toast. One day, he took two pieces of toast into the living room then went back into the kitchen to get a drink. During Markus's absence, his brother folded the toasts in half and took a bite; creating a hole in the center when the toasts were unfolded again. It was a reminder of who was in charge. Markus wondered how he could get back at his brother.
Their dad was a house painter. When Markus was 15 and his brother 17 they helped their dad with his work. One day while eating lunch, his brother pulled out from his red esky (cooler) 2 sandwiches, a drink, and 2 hardboiled eggs. Their dad said that he had a friend who could crack hard boiled eggs on his head. Every lunch after that, Markus's brother would crack his hard boiled eggs on his head.  Markus realized what to do (a light shown down from the sky, he said. It was his one miracle). One day while they were getting their lunches together before going to help their dad, the brother went to use the bathroom. Markus swapped two raw eggs for the two hardboiled ones in his brother's red esky. The brother came back and left with his esky. Markus thought: this is going to be the best day of my life. It was ecstasy, and then it was agony. Before lunch he confessed to his dad of what he had done. His dad was high up on a ladder, painting. Markus said, "I've done something real bad." his dad thought Markus was referring to some work mistake. Then Markus got cold feet and said "never mind" but finally did end up telling him. Hs dad had come down the ladder and after Markus confessed what he had done, his dad put his hand on Markus's should and said, "son, that's brilliant. Don't be late for lunch." Markus's dad also confided that he wished he had thought of it. At lunch, the brother noticed both of them looking at him. "What?" He cracked an egg on his head before he sat down. Their dad was on the ground laughing.

~~~~~~~~~~~~~~~~~~~~~~~~~~~~~~~~~~~
Okay. I'll try to add to this later, maybe, but I've let it go for so long! I need to get past this post! I'll just finish by telling you that because I had gone the previous week to the Brandon Mull lecture hosted by the library, in the same room, I knew exactly what to do when the presentation was over. As the other patrons sat dumbfounded, I quickly broke free from Markus Zusak's lingering Aussie spell and headed straight for the signing room where he was waiting. I was first in line. I read somewhere that people were still in line at 1:30 in the morning. I was totally home by what, a little after 7 PM? 7:30? Anyway, it was an awesome experience. Thank you Provo Library!


Here is the recording of the lecture from Provo Channel 17. I hope you enjoy it!
EDIT (8/2014): Looks like the video has been removed! Ack!
So, sorry for this craziness of mine (I don't known what else to call it. Maybe lameness). Now on to catch up with all of the other events and visits! Ugh!
Posted by Diana