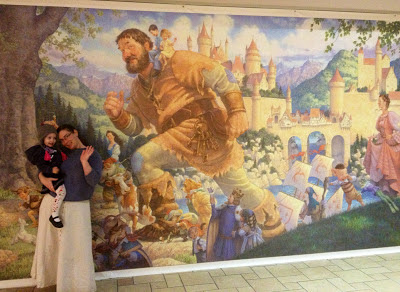 Last night I had the opportunity to meet artist and author Scott Gustafson. He currently lives in Ohio but is visiting Utah and had a signing at The Frameworks in the University Mall in Orem! I'm so glad I could meet him! When I worked at Shenanigans several years ago back in Virginia, we sold Scott's beautifully illustrated Classic Fairy Tales anthology. And how awesome that there is a mural of the cover of that book right outside the shop he was signing in last night (see right)!

When Scott was very young he wanted to learn animation. He still had the interest when he was college age so he decided to study it at The Chicago Academy of Fine Art. Over the years though he had fallen in love with painting through the works of Normal Rockwell, Arthur Rackham, N.C. Wyeth, and others. So while he has done some work for Dreamworks since graduating college, he has primarily focused on a career as a freelance artist and painter.
Scott has worked for numerous clients such as Celestial Seasonings and The Saturday Evening Post and has created a plethora of wonderful paintings besides, many of which are available as prints and other items. He has also illustrated several picture books including The Night Before Christmas, Peter Pan, and The Nutcracker, the first two having the original story text and the third with text adapted by Fiona Black, Animal Orchestra: A Counting Book and Alphabet Soup: A Feast of Letters, both with original text by Scott, and Classic Fairy Tales and Favorite Nursery Rhymes from Mother Goose, the former with text adapted by Scott from the original tales. He is also the author and illustrator of Eddie: The Lost Youth of Edgar Alan Poe, Scott's first middle grade novel which debuted in 2011 from Simon & Schuster. 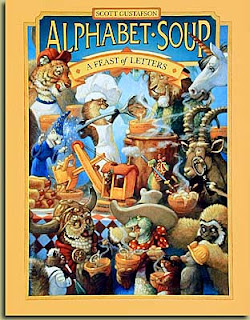 The book I bought last night is Alphabet Soup--because it's about food! (Eddie wasn't available, but I'd like to own that in the future as well.)


(From School Library Journal)
Otter finds a big old soup pot in his new home and invites 26 friends to a potluck house-warming party, asking each to bring a food that's soup-worthy. From Armadillo with his asparagus, to Zebra with his zucchini, they all contribute to a hearty meal and a lush, lively alphabet book. Gustafson's beautiful paintings are dark and soft, and his striking use of light adds drama and depth.

The images in Alphabet Soup are so lush and vivid! (as a side note: especially from the cover, I'm reminded of Australian illustrator Graham Base.) The atmosphere of a warm, cozy, delicious-smelling kitchen is conveyed perfectly in Scott's illustrations. The text is clever and simple and the animals and items/food that correspond with the letters of the alphabet are refreshing. Like the "x" sound in "ox" is used for "x" along with "xylopia fruit extract". Nice, right?


Recipe & Party Time!
I especially like Otter's potluck invitation to his friends, "I have a pot and if I'm lucky you will all bring ingredients...". This is a great idea for a real get together! Especially for the chilly weather this time of year. And you don't necessarily need to invite 26 friends--but if you do, you could ask each of them to dress up or wear something that represents one of the animals in the book. You would be Otter of course! Ask friends to bring soup ingredients or already made side dishes and appetizers, etc.. If you make the soup while the guests are there and play party games while you wait (like the animals did in the book) you'll have to keep the side dishes warm or re-heat them when you're ready to eat.
Below you'll find the alphabetical list of food and items (or input) from the animals in the book (click the list items to see Scott's artwork). After the list, I've created a menu including the main soup, appetizers, side dishes, and desserts.

Asparagus from Armadillo
Bread (in large baskets) from Bear
Crackers (carried in a crane) from Cricket
Desserts (various) from Dragon
Eggplant from Elephant
Flapjacks (from a frying pan) from Frog
Garlic (in a golden goblet) from Gibbon
Herbs (in a high hat) from Hedgehog
Inspected ingredients by Ibex
Jams & jellies from Jaguar
Kumquats, Ketchup, & Krill from Koala
Lentils (in a ladle) from Lion
Mushrooms from Mole
Noodles (ninety-nine in a net) from Newt
Onions & okra from Owl
Potatoes, parsnips, & peas (on a platter) from Pig
Quinces (in a quart jar) from Quail (Queen Quinella)
Rutabegas (roasted, ranch-style) Reptile
Salad of scallions, spinach, & seasonings Squirrel
Things (a truckload of them) including a table, toaster, teacups, toothpicks, & a teapot from Tiger
Utensils (in an umbrella) from Unicorn
Vegetables (in a violin case) from Vole
Wieners (in a wagon) from Weasel
Xylopia fruit extract from Ox
Yams from Yak
Zucchini from Zebra

Main Dish:
Soup
(View Scott's illustration of Otter tasting the soup)
May include:
-Garlic
-Herbs
-Lentils
-Noodles
-Onions
-Potatoes
-Peas
-Vegetables
The illustration includes cauliflower, corn, green pepper, green beans, radish or rutegega, tomato (though arguably that's a fruit), celery, and carrot.
-Xylopia fruit
Also known as kimba pepper, African pepper, Moor pepper, Negro pepper, Kani pepper, Kili pepper, Sénégal pepper, Ethiopian pepper, Hwentia and Guinea pepper can be added whole to the soup for seasoning and then removed before serving. You can purchase a package of it here.
-Zucchini
Use a vegetable stock base.
Put the ingredients in first that need longer to cook like the potatoes and carrots and things that need less time to cook in last like peas and zucchini slices.

*Serve with crackers for "C". Even better if you have a little crane truck toy that you can put in the midst of them with a few crackers in the scoop.

Desserts:
Dragon in particular brings desserts, including doughnuts (see below), but also other items such as cream horns and pie and strawberry shortcake. You can take your pick! (See the illustration here)
Bran muffins
Classic Bran Muffins
(Bear serves bran muffins as one of his breads.)

Doughnuts
Krispy Kreme Doughnuts
or this Crispy & Creamy Doughnuts recipe.
Flapjacks
Old Fashioned Flapjacks
Serve with jellies & jam if you'd like to use "J".
Kumquats
Roll one at a time around in your hand and eat with the skin intact. A kick of sweet and sour!
Quinces
Rosy Poached Quince
or try this similar recipe for Poached Quince w/ Vanilla & Cinnamon
Quince & Blueberry Crumble Cake


If you have some way of putting the utensils (spoons, forks, knives) in an upturned umbrella, go for it. Or you could do this umbrella wrapped utensils craft for everyone's place setting. Also, you could put teacups at everyone's place setting and pour drinks from a teapot because that's what Tiger had on his truck! (as well as a toaster...)
The book also says that the animals played party games while the soup was cooking. Check out this page of 21 party game ideas! I particularly like the game "In the Manner of the Word" which is called "After the manner of the Adverb" at the link. One person has to guess the word chosen by the group via questions and actions. It gets pretty hilarious. You could also do some animal themed games because of the animals in the book!