This past Monday I was able to meet YA author Maggie Stiefvater at the Orem Barnes & Noble on tour for her newest book, The Raven Boys (first in a four book series). Along with The Scorpio Races (which this post is about) and The Raven Boys, Maggie is also the author of The Wolves of Mercy Falls trilogy and the Books of Faerie series.
Maggie is a very animated person and told stories as if she were onstage. She's a writer, artist, and musician, so I wouldn't be surprised if a little drama worked it's way in their too. In reference to The Scorpio Races, Maggie told us how she and her sister had a horse when they were young and how they would ride it around the neighborhood and sometimes into people's garages. Maggie is a wildie. Also, for research for The Scorpio Races, Maggie journeyed to cliffs in both the US and Europe. 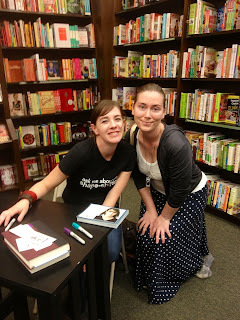 She said that youth author Susan Cooper is one of her author idols and is a huge influence on her writing. Maggie mentioned The Dark is Rising sequence and its inspirational taste of Wales in connection with The Raven Boys which is also steeped in Welsh lore. I LOVE The Dark is Rising series and happily raised my hand when Maggie asked if anyone in the audience was familiar with it. She gave me invisible ponies as a reward. Maggie also said that as a child she often checked out An Encyclopedia of Fairies from the library which is where she learned about Water Horse mythology, the base of The Scorpio Races. I read that book too when I was a kid! along with A to Z Superstitions, the Time Life Enchanted World collection,  cryptozoology books, and tons of other folk and fairytale info. books. Maggie also likes Diana Wynne Jones stories. We're practically twins. Just Kidding! But she does live in Virginia, which is where I grew up. Oh the similarities. Aaaaanyway--
Maggie is part of the YA author group The Merry Fates, made up of herself, Tessa Gratton, and Brenna Yovanoff. Check out their site for short stories by all three. For specifically Maggie's stories, click here.
And just FYI, Warner Bro's has optioned The Scorpio Races for film. EDIT: Focus now has the film rights and is moving forward (as of Nov. 2014)! 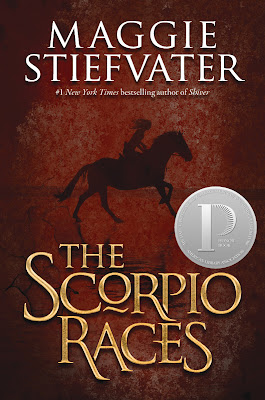 (From Goodreads)
It happens at the start of every November: the Scorpio Races. Riders attempt to keep hold of their water horses long enough to make it to the finish line. Some riders live. Others die.
At age nineteen, Sean Kendrick is the returning champion. He is a young man of few words, and if he has any fears, he keeps them buried deep, where no one else can see them.
Puck Connolly is different. She never meant to ride in the Scorpio Races. But fate hasn’t given her much of a chance. So she enters the competition — the first girl ever to do so. She is in no way prepared for what is going to happen.

Read the first three chapters of The Scorpio Races.

The Scorpio Races offers a unique twist on the Kelpie/Water Horse mythology, set on a fictional island in the known world. The island of Thisby is Ireland-esque and Maggie conveys the stark and haunting atmosphere well. The time setting is not clear but is most likely, at the least, in the 20th century. The specific range though is the month of October and the first day of November--so appropriate to post about right now. The pace of the story is somewhat slow because of much description and journal-type thoughts and observations from the main characters, one boy and one girl, but not enough to make me put the book down. I was definitely invested in the characters and wanted to follow their development and decision making in the context of the main backdrop of the story, the deadly Scorpio Race.
The mythology and superstitions in the story are very organic and weave a strong foundation for the two main characters. The main themes of family, loss, and identity stand out in the stark backdrop of Thisby and the upcoming races. I also appreciate Maggie's handling of the developing relationship between the two main characters because they both remain independent and strong.


The Lore:
Man-eating horses from the sea are the foundation of The Scorpio Races.
Capall Uisce is the Irish name for the dangerous water horses of legend and is the name used in The Scorpio Races. In the acknowledgements at the end of The Scorpio Races, Maggie tells us that the name is pronounced CAPple ISHka. Capall = Horse (Capaill is plural) + Uisce = water. As in many languages the adjective comes after the noun it describes, so the translation is Water Horse (not horse water, that would be something entirely different. Well, not something you'd want anyway.)
Maggie said that her first attempt at incorporating this mythology into a story was to write about a water horse shape-shifting into a man, but after a couple of less-than-desirable results, including a story called The Horses of Roan, and many years in between, she decided to take the basic idea of dangerous horses from the water and create her own mythology and specifics. What she came up with in The Scorpio Races is a powerful backdrop to the life and struggles of the main characters.
Here's some more info. about water horses. Most are deadly. The ones I'm familiar with from childhood (reading, not experience) are the Púca and the Kelpie.
* Water Horses & Other Fairy Steeds @ House Shadow Drake
* Water Horse - Wikipedia
* Púca - Wikipedia
* Kelpie - Wikipedia


h
Maggie made this trailer for The Scorpio Races! Artwork and music! She is uber talented.
To download Maggie's Scorpio Races MP3, right click here and "save link as".


Food from The Scorpio Races:
Maggie has always wanted to write books with palpable descriptions of foods (like the "goluptuous" butter pies in Diana Wynne Jones' A Tale of Time City, an example Maggie has given) and she has succeeded in that regard in The Scorpio Races. There is mention of tiresome beans, apple cake, potatoes in broth, chicken and dumplings, homemade bread, cinnamon twists, biscuits (the cookie/cracker kind), normal tea, and then the more detailed November Cakes and butter and salt tea.
Below you will find Maggie's very own recipe for the gooey November Cakes along with a recipe I found for the unique tea, which come to find out is a common Tibetan drink called po cha used to combat the cold (including chapped lips). This would come in very handy on Thisby during the time the story takes place (Fall). The tea serves as an element that further portrays the character of Malvern (the one who drinks the tea) as eccentric and well-traveled (as only wealthy people can be).

November Cakes
(Recipe from Maggie Stiefvater. Click to enlarge. For an image of only the recipe text, click here.) 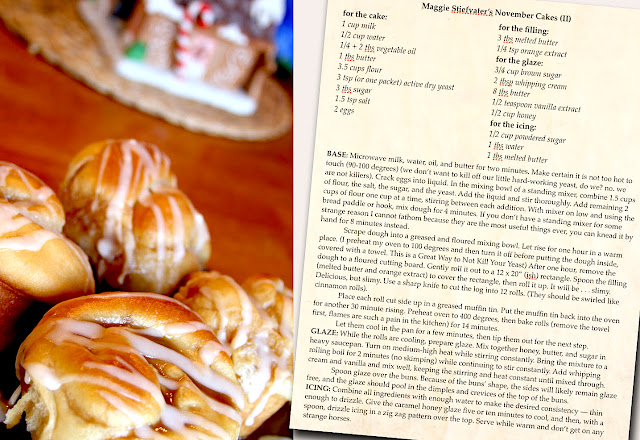 Himalayan Salted Butter Tea (Po Cha)
(An original recipe by Lorraine Elliot @ Not Quite Nigella. For information about the tea, please visit the original post.)
Ingredients:
2 cups of whole milk
2 teabags of black tea
4 teaspoons of sugar
2 tablespoons of butter
salt to taste
Directions:
Boil the milk with the teabags for 2-5 minutes.
Add sugar and using a whisk, dissolve and then add butter and salt to taste.
Whisk thoroughly so that it is foamy and the butter is completely emulsified.
Makes 2 cups

(If you're not in to black tea I'm sure you could use green tea or rooibos (red). Anything too flavorful, like mint, might be too big if a change to the recipe though, but you could certainly give it a try! For another po cha recipe, which may be more traditional having no sugar, click here. For Maggie's po cha experience, click here--she says it tastes like scones.)