(YA) Feedback by Robison Wells + Recipe

Wowza. These books are awesome. First with Variant (posts here) and now with Feedback. Robison Wells sure knows how to spin a thriller. I received my copy of Feedback, book 2 in the Variant trilogy, Tuesday afternoon, began reading it Tuesday night and finished it in the wee hours of Wednesday morning. It was one sitting, no breaks. It was that good.
Leading up to the release of Feedback, Robison wrote eleven posts of Bonus Features for Variant, going chronologically by chapter. For the complete listing, visit the last Bonus post and scroll to the end.


(From Goodreads)
Benson Fisher escaped from Maxfield Academy’s deadly rules and brutal gangs.
Or so he thought.
But now Benson is trapped in a different kind of prison: a town filled with hauntingly familiar faces. People from Maxfield he saw die. Friends he was afraid he had killed.
They are all pawns in the school’s twisted experiment, held captive and controlled by an unseen force. As he searches for answers, Benson discovers that Maxfield Academy’s plans are more sinister than anything he imagined—and they may be impossible to stop.
Variant blew readers away with its breakneck pacing, flawless plotting, and impossibly high stakes. It earned starred reviews from both Publishers Weekly and VOYA, which described it as “an exciting, edge-of-your-seat read that combines psychological themes from works like Lord of the Flies, The Hunger Games, and Ender’s Game in a truly unique way.”
In Feedback, Robison Wells delivers all the answers you’ve been craving—with enough twists and turns to keep readers guessing until the very last page.


Read a preview of Feedback.
Check out Robison's Feedback Playlist.

Feedback is amazing, fast paced, suspenseful, full of thrills and unexpecteds. It picks up right where Variant leaves off and builds up to another startling discovery, blowing the story wide open. Again.
Robison's prose is clear with no muss (and no fuss). I love it. He says what needs to be said to reveal the characters and move the story forward.


Food in Feedback:
The foods mentioned in Feedback were beef jerky, Slim Jims, granola bars in various flavors including chocolate chip, peanut butter, and oatmeal raisin, packets of crackers, and "factory-made, mass-produced" chocolate cupcakes. Granola bars are okay depending on the texture and what's in them, crackers are boring, and chocolate cupcakes are yummy in moderation, but beef jerky? And Slim Jims? Yes. I'm all over it. For Christmas when I was a kid there would be a container of Slim Jim's in my stocking and when I got older I would find a wrapped Summer Sausage under the tree for me (I also LOVE the Hickory Farms Turkey Stick/Sausage). Anyway, good job on slipping a beefy snack into your novel, Robison. I tip my hairband to you.
Even though I love meat snacks, I'll digress (but here's a link to a beef sausage recipe), and because I've already featured cupcake recipes (from Joan Bauer's Close to Famous) I've decided to give you a yummy granola recipe (I do love me some cranberries). 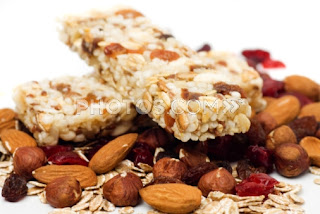