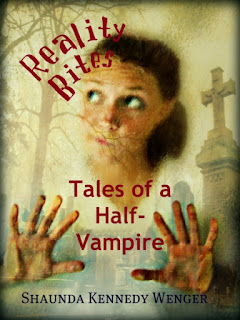 Shaunda Kennedy Wenger is the author of several books including The Book Lover's Cookbook (co-authored with Janet Kay Jensen), Little Red Ridding Hood. Into the Forest Again, The Ghost in Me, and Reality Bites: Tales of a Half-Vampire. She's also written a couple of picture books, Caterpillar Can't Wait, and In Black Bear Country. Shaunda is currently at work on another cookbook tentatively titled The Roundhouse Cookbook, Recipes of a Railroad Housewife based on the life of her grandmother.
Because Halloween is fast approaching I'd like to spotlight Shaunda's quirky, paranormal, middle-grade story Reality Bites: Tales of a Half Vampire which takes place at Halloween-time! Be sure to enter the giveaway at the end of this post for an autographed copy of Reality Bites from Shaunda!


(From Goodreads)
Growing up in a family of vampires, witches, werewolves, and other assorted embarrassments can be tough on a girl who is just trying to be normal and fit in. When the school plans a Halloween ball, dressing up proves to be a lot harder than it should. Mackenzie has high hopes to at least talk with the boy she likes, but first she has to make it out of the house ALIVE, or at least looking like she's not Half-Dead.
What is a "good" girl to do? When reality bites, it make take more than a little bit of family magic to see her through.

I just love the expression on Mackenzie's face on the cover. It conveys the awkward sweetness of this story so well. I mean, the story is about surviving middle school, discovering who you are, all while being part of a most eccentric and unbelievable family. Shaunda has written easy flowing dialogue that moves the story along and endears the reader to the story's wacky cast of characters. Reality Bites touches on the themes of family dynamics, friendship, the school social scene, budding young love, and personal identity. It's a simply written narrative with a safe feel and yet is very playful. It's definitely a good fit for the intended middle school (middle grade) audience. It would also be great as a light read or a book for reluctant readers.