(MG) The Game of Sunken Places by M.T. Anderson + Recipes 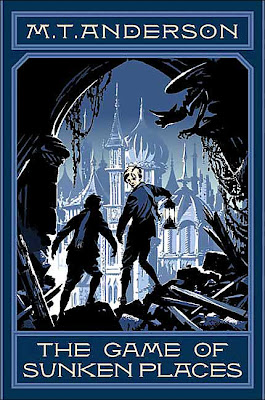 
(From Goodreads)
From the best-selling, award-winning author of FEED comes a fantastic, fun, and funny middle-grade adventure starring two of the most disarmingly deadpan boys you'll ever meet
When Brian and Gregory receive an invitation to stay at a distant relative's strange manse...well, they should know better than to go, since this is a middle-grade adventure novel. But they go anyway. Why not? Once there, they stumble upon The Game of Sunken Places, a board game that mirrors a greater game for which they have suddenly became players. Soon the boys are dealing with attitudinal trolls, warring kingdoms, and some very starchy britches. Luckily, they have wit, deadpan observation, and a keen sense of adventure on their side.
Read the first 26 pages of The Game of Sunken Pages!

"As a teen-ager, I wanted to be a writer, and spent hours plugging away at novels, stories, ball-point comics, and the code for computer adventure games. One of these early novels was published fifteen years later in a much-revised and improved form: The Game of Sunken Places."
--from the "About" page on M. T. Anderson's blog.
It's nice to find out that this is a series because it left many questions unanswered and ended somewhat flat. Well, wanting. Like, I'm wanting more! The story and writing is reminiscent of British author Diana Wynne Jones whom I love, but takes place in America's New England, not the old England of Jones (though Anderson did attend Cambridge University in England). Along with that British feeling, Anderson gives Sunken Places the atmosphere of the past--say, early to mid 1900s. I  kept guessing at the time period for much of the book. I'm pretty sure it's modern times though because a truck in the story is said to be from the 90s (the book itself was published in 2004).
The point of view of Sunken Places is third person omniscient and as such, does not go into anyone's head, but rather is a witness and report of the things the various characters do and observe. I didn't mind this, but did wish that there was more insight into the main characters especially. I look forward to learning more about them in the following books.
Sunken Places is an interesting, quick fantasy read with a clever British feel, set in New England. I enjoyed reading it and now, a couple days later, I am still thinking of it, wanting to read more. Please click here for information on The Game of Sunken Places' journey to publication.

Hooray for me! I don't have to wait for the series to be completed because it already is! As of Jun 1st, last week! So all four books of The Norumbegan Quartet are available now: The Game of Sunken Places (1), The Suburb Beyond the Stars (2), The Empire of Gut and Bone (3), and The Chamber in the Sky (4). ((I  just ordered them all! Hee hee!))


Check out this video for The Norumbegan Quartet featuring M. T. Anderson.

Parents: please watch this on your own before letting your young children watch it. I'm only half kidding.
My other half is very, very serious.
And just FYI, Gerenford, VT, the town in the story, does not exist, though there is a Geren Ford, Inc. which sells women's clothing and accessories. Norumbega is a historical myth of a legendary land in the Northeastern United States. Because of this, Norumbega has been used to name many things in such places as Maine and Massachusetts.
Movie! Movie! A movie adaptation of The Game of Sunken Places is in development (so no release date yet), to be directed by Matt Nix (Burn Notice, Good Guys) and produced by Jason Blum (Tooth Fairy, Paranormal Activity). The movie is connected to Nickelodion Movies, Paramount Productions, and Blumhouse Productions.

Now for the yummy food.
"There we are," said the troll. "All nice and legal. You want to come in for some mulled cider and funnel cake?"
-Kalgrash the troll, Chapter 11, The Game of Sunken Places by M. T. Anderson
Funnel Cake
(Recipe from Tarmia @ All Recipes.com)
Ingredients
8 cups vegetable oil for frying
1 1/2 cups milk
2 eggs
2 cups all-purpose flour
1 teaspoon baking powder
1/2 teaspoon ground cinnamon
1/2 teaspoon salt
3/4 cup confectioners' sugar
Special Equipment
Funnel
Directions
In a deep-fryer, or heavy skillet, heat oil to 375 degrees F (190 degrees C).
In a large bowl, beat milk and eggs together. Combine flour, baking powder, cinnamon and salt. Stir into the egg mixture until smooth.
While covering the funnel hole with one hand, pour in 1 cup of batter. Start from the center in a swirling motion to make a 6 or 7 inch round. Fry on both sides until golden brown. Remove and drain on paper towels. Sprinkle with confectioners' sugar and serve warm.

**From me -- You can use straight up apple juice instead of apple cider for this drink. You can also make this in a slow cooker and let it steep and simmer over the course of a night or a day. You can also use Celestial Seasoning's Sugar Plum Spice tea bags instead of the spice ingredients to give the apple juice/cider a wonderful mulled flavor. And you know what else? This does NOT need to be served warm. Simply make it as directed and then put it in the icebox. Think of it as flavorful/spiced apple juice that can be enjoyed even in the summer. Like iced tea. And then eat it with funnel cake.**
Places to visit M. T. Anderson
* Website
* Blog
* Wikipedia
* Scholastic Site for the Norumbegan Quartet (excerpts and extras)
Posted by Diana