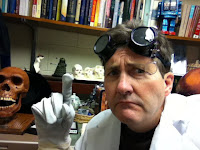 Steven Peck is the author of several articles and short stories including "Let the Mountains Tremble for Adoniha has Fallen", a short story in the Monsters & Mormons anthology and "The Complete Text of the First Ten Volumes of Dr. Fleckwain’s Very, Very Short Steampunk Novels" (for the mp3 version, click here). He is also the author of The Scholar of Moab and the novella, A Short Stay in Hell .
Aside from being a great author, Steven Peck is also an adjunct faculty member at BYU in the Life Sciences department where I'm sure he causes all kinds of good trouble.
The Quickened Chronicles, beginning with Rifts of Rime (Which was originally called Spear from the Wealdend's Tree--Wealdend means to control or rule), marks his debut into the youth market.


“There is one thing, which might show some commitment on your part . . .”
“Name it!” The Thane relaxed again on his spear.
“Deliver the Tail, alive, here, alone, one week from tonight.” The Wolf sat back on the grass of the meadow.
“I will send him, but you must kill him yourself. Agreed?”
The Wolf licked her chops, “Agreed.”

In a world overtaken by greed and a ruthless, power-hungry dictator, Pinecone knows he’s no warrior. But when he’s entrusted with the sacred Scroll of Quickening, an ancient record that holds great power, Pinecone must summon the courage to protect the scroll. If he doesn’t, its secrets will be lost forever.
Meanwhile, Pinecone’s friend Leafe is mounting a makeshift rebellion to fend off the Thane whose evil might grows stronger every day. But her efforts may force her into some troubling alliances.
This thrilling story is full of suspense, surprises, and an epic struggle of good versus evil. Steven L. Peck brings to life a richly detailed fantasy world akin to Brian Jacques’s Redwall series. A truly magical adventure any reader is sure to get lost in.

And for your viewing pleasure, I give you more images of squirrels in armor.