Is this not an eye catching cover? It's like–Woah. And so is the story. It's fast and fun. There are vampires. A bunch of them. And they can do martial arts. And there are unicorns (were-unicorns to be exact). And high school. And prom. And a freckly faced kid who scoops ice cream (oh, Brad, how I was hoping things would turn out differently for you).
Drink, Slay, Love (parody of the title Eat, Pray, Love) is told from the perspective of the snarky teen vampire girl main character, and puts an interesting spin on vampire lore; delving into family dynamics, culture, psyche, foes, and more. Throw in a piercing reality (pun intended) and you've got quite the coming of age, burgeoning identity story. The unicorn aspect of the book, when explained, will have you going "Well, ding dong! Why didn't I think of that before! It makes perfect sense". And did I mention this book is fun? The ending is satisfying and, because of the implications of what happens in the story, leaves the world open for more, though at this point a sequel is not in the works (but Sarah has said that she misses the main character, Pearl).

I have Enna Isilee @ Squeaky Books to thank for this read. It's a book she loves so she featured it as part of her 2011 Birthday Bash–and I won it! Directly from Sarah Beth Durst herself (and it's signed! Yay!)!
I received Drink, Slay, Love last week actually and tried to put it aside and read other, more pressing things, but I just couldn't. Knowing it was there on my shelf with a bottle and straw, blood dripping onto the letter "R", I simply couldn't help myself. I had to read it. Right. Away. So I did. And now I can't wait to read Sarah's other books. (One of which, Enchanted Ivy, was given a cover by the awesomesauce illustrator Sam Weber whom I met a while back [I haven't posted all about it yet, but I did put it in "A Week in Review", here]. He used photos from his Enchanted Ivy cover image process in his powerpoint presentation and I was squirming in my seat thinking, "I know that book! I haven't read it, but I know it's by Sarah Beth Durst!" Anyway, it was an internal geek moment.)

Check out this little video interview below to learn more about Drink, Slay, Love and Sarah Beth Durst. Also, at the end of the Goodreads summary farther down, I've added the link to the first chapter of the book so you can get a TASTE of the story (no straw needed). 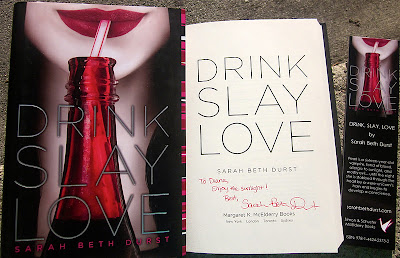 (From Goodreads)      Pearl is a sixteen-year-old vampire... fond of blood, allergic to sunlight, and mostly evil... until the night a sparkly unicorn stabs her through the heart with his horn. Oops.      Her family thinks she was attacked by a vampire hunter (because, obviously, unicorns don't exist), and they're shocked she survived. They're even more shocked when Pearl discovers she can now withstand the sun. But they quickly find a way to make use of her new talent. The Vampire King of New England has chosen Pearl's family to host his feast. If Pearl enrolls in high school, she can make lots of human friends and lure them to the King's feast -- as the entrees.      The only problem? Pearl's starting to feel the twinges of a conscience. How can she serve up her new friends—especially the cute guy who makes her fangs ache—to be slaughtered? Then again, she's definitely dead if she lets down her family. What's a sunlight-loving vamp to do? 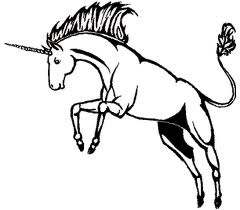 Sarah Beth Durst is the author of Drink, Slay, Love, Enchanted Ivy, Ice, Into the Wild, Out of the Wild, and the upcoming, September 2012 release, Vessel. Please visit her official website.

EDIT: Check out these two book trailers I made! (I couldn't choose between the two.)
Posted by Diana