Multi-award winning author Barry Lopez came to BYU campus to lecture (and also visited the Orem Library) on Wednesday, Oct. 12th and I had the chance to meet him!
Mr. Lopez is not known for youth books, but for non-fiction, environmental, and social commentary. BUT.
I happen to have a copy of his one and only book for youth entitled Crow and Weasel (don't mean for this to sound immodest -but I'm happy about it!).
Crow and Weasel is an original American Indian-esque folk tale (not based on any particular tribe) illustrated by Tom Pohrt (Coyote Goes Walking, Finding Susie. See illustrations below).
I've had the book for about 12+ years and nearly flipped out of my chair when I discovered that he was the author of it. I didn't make the connection at first. I saw that he was coming to the area, found his website, scrolled way down and there it was -an image and quote from Crow and Weasel. I raced to my bookshelf, fearing that the book was packed far away in Ole' Virginy, and squealed with delight when I found it tucked between The Crane Wife and The Gift of the Magi. Wow. It was so cool to meet him. A happy surprise. 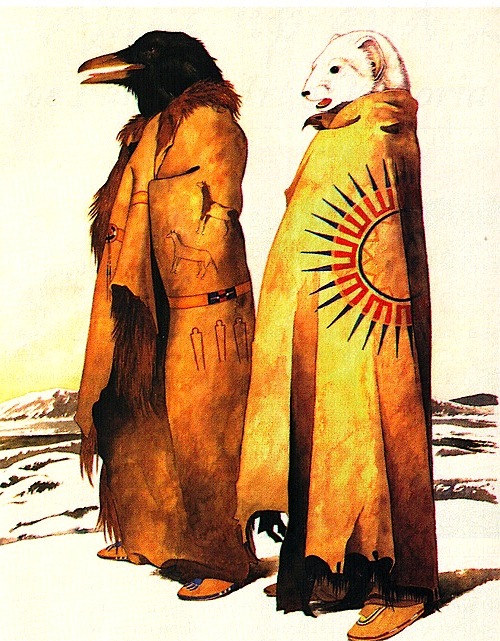 Long ago, when people and animals spoke the same language, two young men left their tribe to make an adventurous voyage through the wilderness, into the unknown northland. Set in the mythic past and inspired by the traditions of the North American Plains people, this fable of self-discovery follows Crow and Weasel as they face unfamiliar perils on a quest for knowledge and wisdom. Conquering their innermost fears, the two heroes come of age and learn more than they ever could have imagined--about humanity's relationship to the land, the importance of respecting other peoples and giving thanks, and even the very nature of friendship itself.

I wasn't able to go to Mr. Lopez's lecture, but I got to see him directly afterwards. I had my wee one, Little A, in her stroller, and we rolled down the aisle of the auditorium after he gave his presentation so I could get his autograph before he left -but there was a signing with refreshments planned in a nearby room that I didn't know about!
Mr. Lopez kindly helped me pull my stroller backwards up the aisle, commenting that he had four daughters of his own. We then wheeled over to the nearby little room, crowded with the students and some professors who had just come from his lecture. There was a table set up with a register and several stacks of Mr. Lopez's books; all of his more known books, not my Crow and Weasel.
So I got his autograph and a picture with him.
I truly never thought I'd meet him!
As I was standing next to him for the photo he told me that a few years after Crow and Weasel was published in 1990, he came to Sundance Resort here in Utah and was inspired to create a play of the book. He worked with Jim Leonard, Jr. and John Luther Adams on the project. You can view a sample of the printed play here.
The music company Narada even produced a song inspired by the story on the CD "A Childhood Remembered" (and you know what? We had that CD when I was growing up, and I never knew until just this moment that that song was based on this book. Wow. It all comes back around, doesn't it? And I really liked that song too). Below is the song paired with a video of American Indian pictures and quotes. Nancy Rumbel is the song composer, accompanied by Eric Tingstad. 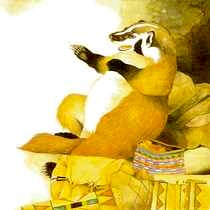 "I would ask you to remember only this one thing," said Badger. "The stories people tell have a way of taking care of them. If stories come to you, care for them. And learn to give them away where they are needed. Sometimes a person needs a story more than food to stay alive. That is why we put these stories in each other's memory. This is how people care for themselves. One day you will be good story-tellers. Never forget these obligations."