Thursday's Quotables: The True Story of the 3 Little Pigs 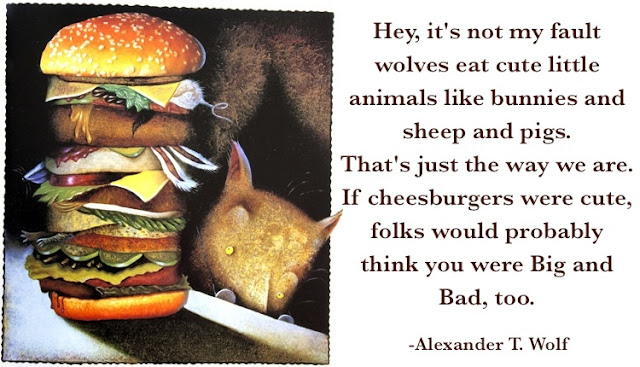 (From Goodreads)
Did the story of the three little pigs ever seem slightly biased to you? All that huffing and puffing--could one wolf really be so unequivocally evil? Finally, we get to hear the rest of the story, "as told to author Jon Scieszka", straight from the wolf's mouth. As Alexander T. Wolf explains it, the whole Big Bad Wolf thing was just a big misunderstanding. Al Wolf was minding his own business, making his granny a cake, when he realized he was out of a key ingredient. He innocently went from house to house (one made of straw, one of sticks and one of bricks) asking to borrow a cup of sugar. Could he help it if he had a bad cold, causing him to sneeze gigantic, gale-force sneezes? Could he help it if pigs these days use shabby construction materials? And after the pigs had been ever-so-accidentally killed, well, who can blame him for having a snack?

As with The Stinky Cheese Man and Other Fairly Stupid Tales, (another stellar collaboration by Jon Scieszka and illustrator Lane Smith), children who know all the old stories by heart will delight in reading impudent new versions. Here, Scieszka's text is clever, savvy and pithy, and Smith's stretchy-strange illustrations complete this funny, irreverent, thoroughly original tale.