I have decided to begin a book quest --or an adventure. About a month ago I finished reading The Hunger Games trilogy by Suzanne Collins. I loved it. In the beginning the first hand point of view (POV) took some getting used to for me. Also with all the violence and killing I didn't feel that I could say that I enjoyed it or liked it. But there was something about the series that grew on me or in me as I continued to read. Since completing the series I can say that I do love those books because of the great story and the great writing. Also something about those books reignited my desire to write. Reading and writing go hand in hand, after all.
A few days later as I was in the Provo City Library (a very awesome place, by the way) checking out an armload of books (Ha! I just had an image of me giving a stack of books an up-down glance and winking), I noticed two posters advertising upcoming author lectures. One was Latter-day Saint (LDS) author Brandon Mull (Fablehaven, The Candy Shop War) and the other was Australian (not that that's also a religion) author Markus Zusak (I am the Messenger, The Book Thief). The thought immediately hit me that if I wanted to become a better writer and also learn more about books, I should go to these lectures. Thus began a chain reaction of discovering many upcoming local book events including lectures, festivals, signings, and symposiums. In googling many authors I also discovered that there are so many LDS YA (young adult) writers! This inspired me even more. Many of them even graduated from Brigham Young University like I'm trying to do! If that Mormon mom can write and even get published, what's stopping me from at least just writing (getting published someday would be incredible but this isn't a means to an end, it's the means I'm talking about. These authors being published is simply physical evidence that they are doing what they love)! I'm sure by now that the whole planet is well aware of Stephanie Meyers and her sparkling vampires (that's Van Helsing in the picture in case you were wondering), perhaps even knowing that she is LDS. She is not necessarily who I am talking about (I proudly confess that I have not read her books. A good friend did give me the run down though while we sat on my bed eating glittering Twighlight Forbidden Fruits conversation hearts. It sounded pretty...messy...and...well, silly. I recognize that in light of my new book quest I do need to eventually give in and read the series. I will, I will. Don't push me!). There are quite a few other LDS YA authors as well (I have to say though, it seems that she has really put LDS YA authors on the map).
So my book adventures will consist of meeting authors, getting autographs, going to festivals and lectures, taking writing classes, and writing. I am very excited. LDS author, Julie Berry (The Amaranth Enchantment, Secondhand Charm), said in an interview for The Boston Globe, "I know motherhood is the most important thing I'll do in my life, but there's something about motherhood that makes you feel like you're disappearing - it kind of effaces and erodes you. I came into writing as a gift, and . . . I really feel like it rescued me. Those first years I would thank God every day for giving me writing." This resonated with me. I'm not sure what else to say but I have a spark and I'm going to do what I can to kindle it. I'm going to have fun with this and hopefully I'm going to give my daughter something special too (tons of books, an author autograph collection, and original stories??? That would be pretty dang cool). Onward ho! 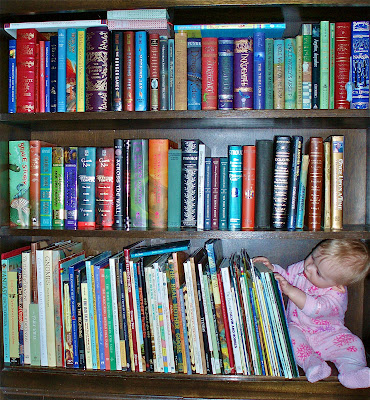