Yesterday I had the pleasure of visiting with LDS author Michael O. Tunnell in his office on campus. He has published many books for children and young adults including, Mailing May, Brothers in Valor, and Wishing Moon with its sequel, Moon Without Magic. How awesome is it that I can just walk right up the hill to sit down and talk with him? Very awesome indeed. But there is more to this story. I realized that I have a history concerning Mr. Tunnell.
I discovered his book, Wishing Moon, downstairs in the BYU bookstore's children's section. They have very nicely dedicated a shelf to LDS authors (this has been very helpful for me but now I realize that they have populated it too sparcly). The book was only $2.99---$2.99! Hardback! Wow (and apparently this hardback version is going out of print. I also snagged the sequel on Amazon.com for $4.04. Wow again). As I have been doing with the LDS authors whose books I come across, I googled Mr. Tunnell. That is how I found out that he is a faculty member of BYU. I assumed that he was in the English department so I virtually searched for him there. I did not find him. I found him in the David O. McKay School of Education. "Oh. My. Gosh." I thought, "I used to clean that building every morning between 5 AM and 8 AM. I know which office is his. I mean, I know which one I think is his. It's got to be the one that I was very slow about emptying the trash because I just wanted to ogle at the books filling the shelves around the room." It was a magic room to me. There were always boxes of books stacked one on top of another from various familiar publishers (I worked in a specialty toy store for six or seven years, primarily with the books. I was usually the one who unpacked and checked in the shipments. It was like Christmas each time). I also knew which classroom had to be his. The shrine. The room that wore its high shelves of children's books behind protective glass. I would kneel at its feet and slowly clean the metal shavings from the runners of the glass doors. I loved that room. And sure enough, when I asked Michael O. Tunnel during my visit if that was indeed his classroom, he said that it had been. Now though he is forced to use an auditorium because of his class sizes. That's good I suppose but that book shrine/classroom certainly was special.
Now back to Monday's visit. I made an appointment over e-mail with Mr. Tunnell and was very impressed by his prompt response. I was even more impressed when I met him in person. As I entered his little book filled office he quickly moved several boxes to make room for me to sit down. We had a very pleasant conversation ranging from his personal writing process to the publishing process, even touching upon a grand story that he is finally working on after 20 years. He told me about his trips to the Middle East; once for a conference and second with his wife to do research for Wishing Moon. He told me that really anyone can be published. You have to do your part though and do it the best you can (that is not a quote but the gist of what he conveyed). I greatly appreciated the time that he took to talk with me. He signed my copy of Wishing Moon (of which I removed the dust jacket before I left home so as to not muss up in transit) and I walked away feeling light and fluffy inside. One down, and happily, tons to go! 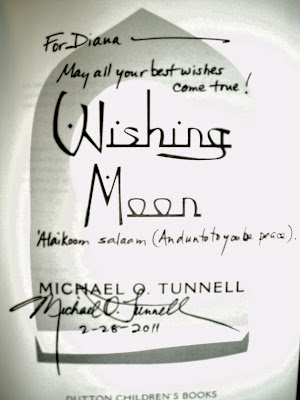 'Alaikoom salaam'
(And unto you be peace)