Remember that post advertising a lecture this past Wednesday having to do with picture books and mentor texts? Well, it was a local (BYU) meeting of the International Reading Association (of which I am now a member, and of which the BYU liaison said that I reminded her of "that British actress who was married to Kenneth Branagh. She played Nanny McPhee". "Emma Thompson" I responded, and also added that she writes children's books [which I cannot find a good link to]. That made my day, though I did not think to ask whether she meant Emma Thompson/Nanny McPhee when the children are bad or after they are good...perhaps she did not mean looks necessarily).

It was a wonderful meeting (I think I may have been the only student there who was not in the English teaching major and who was not seeking extra credit for attending), all about the power of children's books. You could tell that the professor giving the lecture, Dr. Deborah Dean (Goodreads page here), was completely in love with what she was talking about. She brought somewhere around two dozen picture books and leaned them all against the white board using the marker tray (you know, that silver shelf thingy). I was pleased that I recognized several of them (internal kudos for me!). During the lecture I scribbled down copious notes into my tiny notebook. I have typed them for you here in a .doc file that you are free to download (I hope that's okay!). 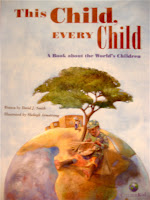 Oh! I almost forgot. There was pizza. How cool was that? AND I won a book (shown right)! I also met some very nice people who were glad that I came and who didn't mind that I was not in the major majority (I kind of felt like I was crashing their party). When I later went to turn in my application and fee to join the International Reading Association I learned that many people in the club are not English teaching majors. You know what else? The liaison asked me if I'd like to be an officer! I said that I would so we'll see what happens in the Fall (the semester is pretty much over now so the club will be dormant until then).

Now I just have to catch up on writing about the rest of last week's adventures: the Brandon Mull lecture at PCL and the Costco Ally Condie book signing!
Posted by Diana