After the Publisher's Fair this past Wednesday, I had a meeting with LDS author Douglas Thayer. He has been called by some, the Mormon Hemingway (it's true, it says so on the back of his book Hooligan & on Wikipedia). Professor Thayer was born in Provo in 1929 and later became a teacher at BYU where he has been teaching for the past 50 years. He is retiring this August (good thing I visited with him while I had the chance!) at the age of 82 (can you believe it?!). Currently Professor Thayer is working on a history of the BYU English Department as well as a young adult novel titled Avalanche (formerly Beneath) about a boy who is buried alive under about 30 feet of snow and must figure out how to survive (what an exercise in imagination!).
Last winter I was a student of Professor Thayer in his last ENGL 150 class. I didn't like it at first. Professor Thayer is a character. I didn't know what to make of him. As the semester rolled along though, I began to really enjoy the class because 1) it was small and informal and 2) Professor Thayer would go off on tangents to tell stories in a very story teller-ish, not to mention self-assured way. I got a kick out of listening to him whether he meant to give kicks or not. I also learned a thing or two that has stuck with me. First is that to be a good writer you must be a good reader. As much as I don't like to pick other peoples' writing apart, this makes sense. You need to learn how and why other authors write the way they do. Then you can apply those principles to your own work (or at least think about your own writing process). This way your writing can be more meaningful. Second I learned that your first sentence must be powerful. It must grab the reader and pull them into your story (or tap them on the shoulder and beckon them to follow, or give them a whiff of something delicious, promising them a full course meal. You get the idea). Think of Bulwer-Lytton's, "It was a dark and stormy night..." (ooooo! Creepy! What happens next?) or Dickens', "It was the best of times, it was the worst of times..." (what does that even mean?? I've got to find out), or Melville's, "Call me Ishmael" (really? What kind of name is that? Who are you?). Check out this blog post by LDS author Carol Lynch Williams about first lines. Thirdly, I learned that your writing must be clear and concise. Do not write in circles, repeating yourself using different words, and don't be ambiguous or overly flowery (floral?). Don't bore or tire the reader out. Also, the reader should not have to do any guess work (unless you've written a mystery). I'm definitely not the best at this but the lesson does resound in my mind as I write. And re-write. And re-write some more (it's amazing how many different ways you can say one thing!). 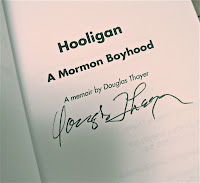 Professor Thayer gave more good information during my visit. He told me about his writing process (this is the gist of it anyway); he writes story ideas on index cards, sometimes simultaneously typing the story on the computer, prints what he has typed, shrinks it, then, along with the index cards, lays it all out onto a big library table and puzzles it out or simply surveys the whole story at once. Wow. Can you picture fitting a whole novel, tiny little pages, onto a table top?  He also told me that he attributes his mental health (many people his age have Alzheimer's or other debilitating mental issues) to his daily writing. He continuously exercises his brain (and as a side note, he also enjoys fishing). This makes a lot of sense. If you don't use it you'll loose it (like produce, talent, coupons, and marbles).
If you'd like to meet Douglas Thayer and get his autograph too, he'll be making an appearance (along with a slew of other authors) June 4th at the BYU Book Festival.