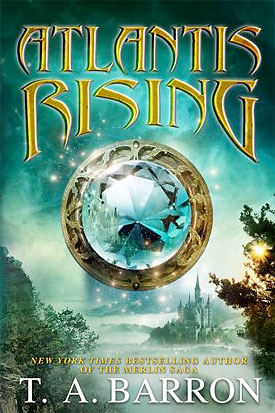 T. A. Barron, author of the Heartlight trilogy and the epic Merlin Saga, among many other books for youth, now explores the origins of the mythic isle of Atlantis in a new trilogy beginning with Atlantis Rising, the paperback of which releases this Thursday (9/25/14). Book 2, Atlantis in Peril, is due out Spring 2015. Mr. Barron is also the founder of "The Barron Prize for Young Heroes", a national award to promote and honor heroic qualities in young people.

In a magical land called Ellegandia, a young boy named Promi scrapes by, stealing pies, cakes and sweets to survive. But little does he know that his country is a pawn in an ages-old war between good and evil, battled both in the spirit realm and in the human world. Harboring secrets of his own, Promi teams up with a courageous girl named Atlanta and the two vow to save their land—and each other—no matter the cost. But their vow has greater repercussions than they ever could imagine—in fact, it may just bring about the creation of Atlantis, an island cut off from the rest of the world, where magic reigns supreme.

With his trademark action, adventure, and poignancy, master of fantasy, T.A. Barron explores a new mythology—the origin of the legendary isle of Atlantis.


Atlantis Rising is an immersive fantasy that takes place in a varied and magical land, three sides ocean and one side high, nearly impassable mountains bordered on the opposite side by Africa. It is unlike any place in the known world, or rather all parts somewhat similar to many places in the world, but jumbled up and dispersed like a handful of flower petals. The same goes for the inhabitants of the realm, human, plant, animal, and otherwise. The main protagonist of the story is a clever thief boy named Promi who is as good with a dagger as he is at consuming tasty sweets–which is to say, incredibly adept. The other prominent character, bordering on co-main, is the nature magic girl Atlanta who spent a great deal of her life in the Great Forrest, communing with its inhabitants and developing her earth magic. The story is told in the third-person omniscient and focuses mostly on Promi, but also on Atlanta, and far less often on the main antagonist, the power hungry priest Grukarr (who has his own prequel, "Never Again: The Origins of Grukarr", available at the end of the Atlantis Rising paperback or as a free ebook available here).


The prose of Atlantis Rising is very descriptive. Beautiful, but sometimes leaning on superfluous and can sometimes do more telling than showing, or may do both in a bit of redundancy, causing one to feel underestimated in their ability to understand what's going on. I've noticed this in many middle-grade (for ages 9-12 ) novels though so I assume it's simply an assumed necessity for the target audience. The story still moves along at a good pace and is cinematic and action oriented with many interesting concepts, creatures, and locals. The fact that the series deals with the origins of Atlantis is always in the back of one's mind and looms in a strange way while reading, making the story all the more intriguing, trying to fill in the gaps, or see into the future, guessing how Mr. Barron will piece it all together, between this original, beginnings story and the common mythos of Atlantis. The ending is a pleasant package and seems to set things up nicely for a sequel, moving into a new phase for the magical land and its characters. 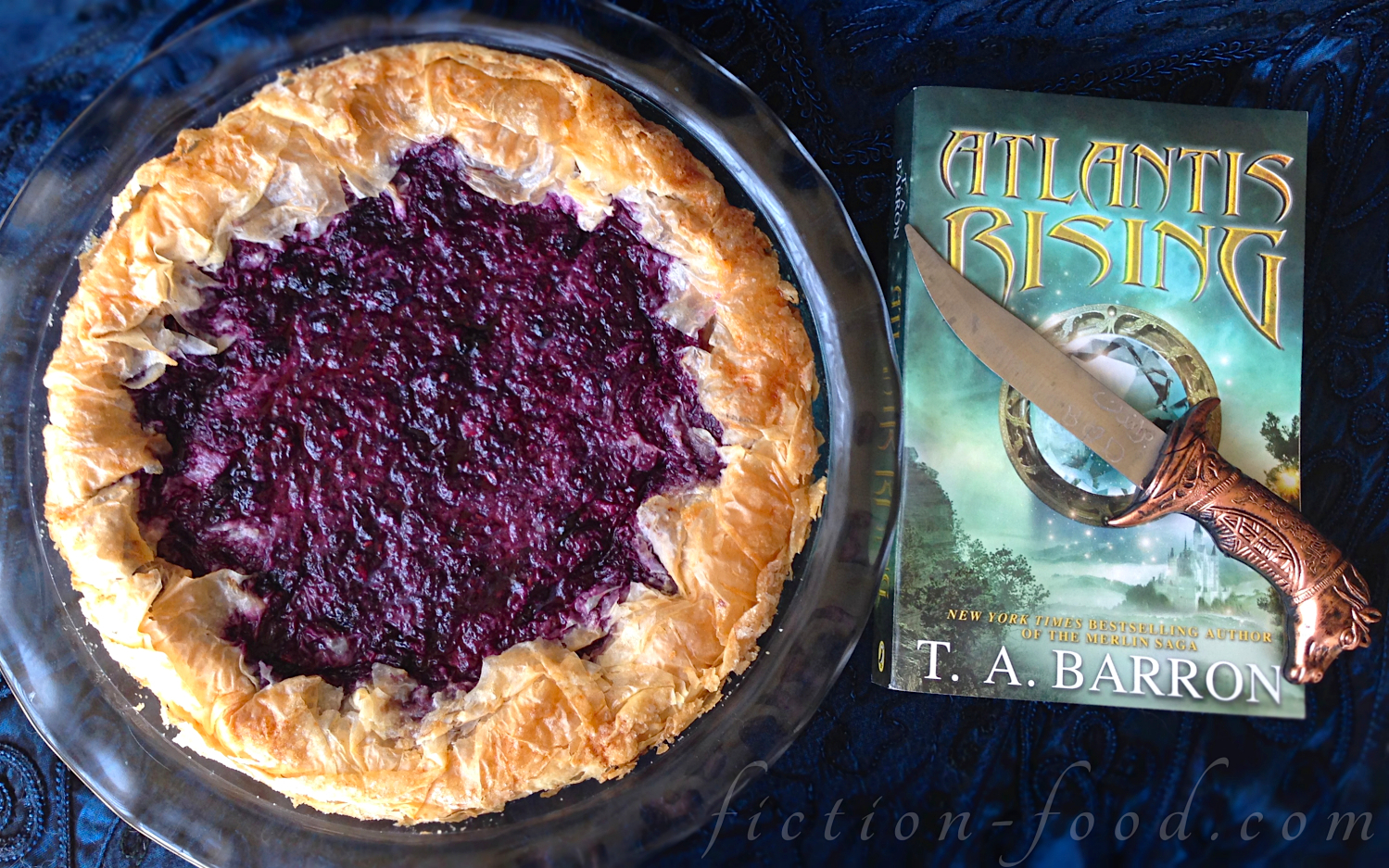 T. A. Barron has written many delicious foods into the story of Atlantis Rising, one being the sacred smackberry pie. I have endeavored to create what I envision the pie to be. You can check out the recipe, photos, and more about the food in the book, including a question of mine answered by Mr. Barron, by clicking here or on the image above. 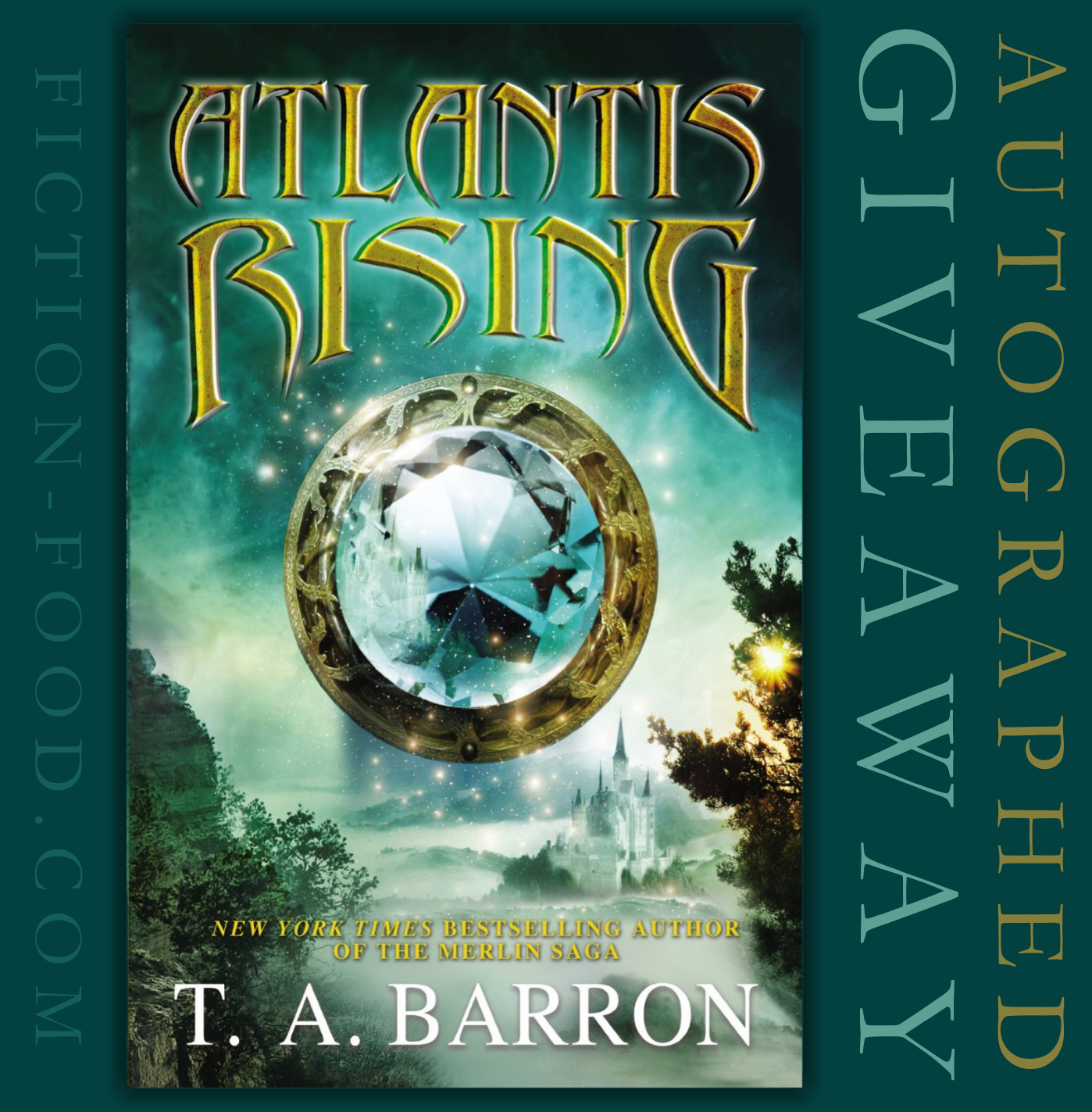 For a chance to win one of the new paperback copies of Atlantis Rising, autographed by Mr. Barron, please enter via the Rafflecopter form below. The giveaway is open to US residents only and will end on Sept. 29th at 11:59 PM PST. For another chance at an autographed paperback, enter Mr. Barron's "Desert to Die For" Instagram giveaway which ends this Thursday (9/25/14) at 5 PM EST. Details can be found here.
a Rafflecopter giveaway