Scotch Eggs from The Narnia Cookbook 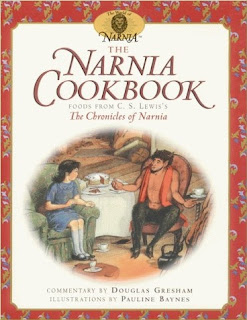 Most likely inspired and adapted from the kofta wrapped hard-boiled eggs of the Moghul Empire in the Indian subcontinent, now a common dish in Pakistan and northern India, the British Scotch Eggs make an appearance in C.S. Lewis's The Chronicles of Narnia as a favorite traveling food of dwarves. A recipe can be found in the now out of print Narnia Cookbook: Foods from C.S. Lewis's The Chronicles of Narnia with commentary by Douglas Gresham (Lewis' step-son) & illustrations by Pauline Baynes (right). But huzzah! An eBook version will be released this Summer (June 25, 2013) from Harper Collins!


“For eating and reading are two pleasures that combine admirably.”
~Clive Staples Lewis

These sausage-wrapped eggs are relatively easy to make, with straightforward directions, and serve as a very portable meal, excellent for traveling, perfect for picnics or quests. In fact, I made them yesterday--though not for a picnic or questing--and they turned out great! I love them and my 2-year-old thinks they're great, too! I'm actually eating one right now...rrmmmph♡.


Scotch Eggs from Narnia
(from the Narnia Cookbook via Katherine @ Creating Through Life. You can find step-by-step pictures in her post)

Directions:
⌘ Divide the sausage meat into 6 portions, and press 1 portion around each egg to cover completely.
⌘ Beat the uncooked egg; then roll each sausage covered egg first in the beaten egg, and then in the bread crumbs.
⌘ Heat 1/2 inch of oil in a pan. The oil should be hot enough to brown a 1-inch cube of bread in 40-50 seconds. It should not be smoking hot.
⌘ Add the eggs, turning them often to brown the meat and cook it thoroughly. If the oil begins to smoke, reduce heat slightly so the meat cooks completely while browning on the outside.
⌘ Drain on paper towels and serve hot.

⌘ My input to the recipe:
I was able to make 8, as opposed to 6, Scotch Eggs.
It's convenient if you make the hard-boiled eggs the night before. If you wait to peel them, you can use that time to let the oil heat up.
For the sausage, I used a 16 oz. "log" of mild ground pork sausage.
When wrapping the sausage around the egg, make it thin so it will cook through evenly and quicker.
Concerning the oil, it would be best if you had a deep fryer or a tall pot with oil in it so you could submerge the wrapped eggs. Again, this would make the cooking even and quick. Otherwise it takes a while to cook each side, including the top and bottom, and you have to check to make sure their is no longer any pink in the meat.

⌘ Variations:
Here's a variation of Scotch Eggs from the BBC adding seasonings to the meat. And here's one adding bacon. You can also flavor the hard-boiled eggs before wrapping them in sausage. Simply submerge and marinate the cooked and peeled eggs in a broth of your choosing--the longer the marinated, the stronger the flavor. It could be soy sauce and Worcestershire sauce or soy paste and honey or coca-cola or tea or beef broth.

⌘ Serving suggestions:
Orange wedges as a side! It's a great compliment. You can also serve Scotch Eggs with dipping sauces like ranch dressing, or maybe you'd prefer ketchup.