(YA) The Raven Boys by Maggie Steifvater, a very long winded review + Food 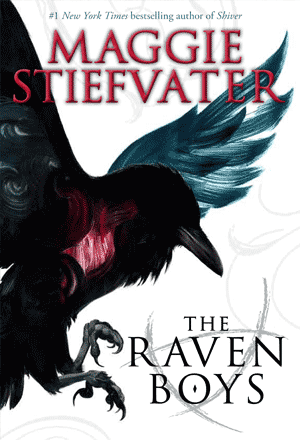 I recently finished reading The Raven Boys by Maggie Stiefvater, book one of four in The Raven Cycle. I. Can't. Stop. Thinking. About. It. So hopefully creating this blog post will assuage my withdrawal and I can get on to another book. Click here to read my previous post with info. from a Maggie book talk/signing I went to and my feature of her book The Scorpio Races.


(From Maggie's website)
Every year, Blue Sargent stands next to her clairvoyant mother as the soon-to-be dead walk past. Blue herself never sees them—not until this year, when a boy emerges from the dark and speaks directly to her. His name is Gansey, and Blue soon discovers that he is a rich student at Aglionby, the local private school. Blue has a policy of staying away from Aglionby boys. Known as Raven Boys, they can only mean trouble.
But Gansey is different. He has it all—family money, good looks, devoted friends—but he’s looking for much more. He is on a quest that has encompassed three other Raven Boys: Adam, the scholarship student who resents all the privilege around him; Ronan, the fierce soul who ranges from anger to despair; and Noah, the taciturn watcher of the four, who notices many things but says very little.
For as long as she can remember, Blue has been told by her psychic family that she will kill her true love. She never thought this would be a problem. But now, as her life becomes caught up in the strange and sinister world of the Raven Boys, she’s not so sure anymore.


Read the prologue & first 2 chapters of The Raven Boys!


Yaaaa! This book was great, like in an ambient, compelling way. And because the Raven Boys are so anime to me (especially Noah, below). I mean boys with close relationships who go to a private school and wear uniforms? And there's supernatural stuff going on? Yeah, I'd rather see this as an anime series close to the book more than a Hollywood movie adapted from the book. But I doubt that will happen any time soon. Though I'm sure the movie will be good if it is made! ((but seriously, there are many anime series that are based on books or manga and they take the time to show details of the characters' personalities and details of the setting, just like how Maggie writes! **dream, dream**))
I've seen some reviews that say The Raven Boys is slow, or slow at the beginning, and I totally didn't feel that at all (maybe because I was busy seeing it as an anime in my head). The character setups are great and engrossing and the way the characters mesh is magic. Each of the characters is believable and understandable and smart. Each one is their own person, with struggles, faults, and awesomeness. I was also impressed with the development of the characters as the plot progressed and as their intentions and fears were laid more bare. Some characters became more endearing, and others a tiny bit less, and I could see where possible choices might take them. And here I'm going to pat myself on the back, there was one part in the story that was supposed to be a twist but totally wasn't to me. I don't want to spoil it for you, but whereas it wasn't a surprise, I was a little disappointed when faced with the truth of it because it has to do with my favorite character in the book and I thought he might not be around anymore, but then I got over my disappointment and was so tickled with how it works out in the end. The end, end. Proving how cool all of the characters are. And making quite the team to begin the second book.
There are several points left unanswered and I wonder (read: hope) they will be addressed in the coming books. The solution to the climax is abrupt and does one of those here they are, intense, intense, then here they are sometime later and we have no idea how they got out of that intense situation/setting, and what happened to that dead body?? I seriously hope that the next book begins with a filler of the time jump. I mean, there's some serious psychological stuff that needs to be addressed for at least one of the characters and also how are the other characters feeling about him now?
The little adages of setting/environment details didn't bother me either (I think they did a little bit in The Scorpio Races, making it seem slow in places). The details in The Raven Boys simply made it more of a visual story for me (again, like an anime! * o *) and gave the feeling that life was happening around these characters, like everyday, normal life, or even magic life, but that the story was happening within an already established world.
Maggie said that she was inspired in her love of Welsh legends by Susan Cooper's The Dark is Rising Sequence. Here, here, me too! And ley lines? Totally knew about them before reading this book. My mom is what you might call an earth religion practitioner. She's pretty cool. I called these "lines" fairy paths as a kid though, as in there are certain routes that fairies take for their processions and so these paths are defacto very powerful places/stretches of land. As a kid I thought for sure an area up in the woods of my family farm was one of those places. Maybe it is. So I grew up knowing about supernatural things, vaguely at most and vividly at best (a little pride there, Diana? Well here comes some more).

I'm totally from Virginia! I love that this book takes place in Virginia. The setting is very familiar to me, the lushness of the trees and the sounds they make with the wind, like the sea, like thousands of whispers (not in Latin, but I did take that in high school). Wind in the leaves is my favorite sound. And the transition of the seasons. And when the tree leaves turn upside down to signal the coming rains. And the blue mountains and the meandering streams. I love it all! Also, Maggie has given one of the main characters the habit/affinity of chewing on fresh mint leaves. This seals the deal for me. On my farm there is a stream/creek where tons of mint clusters grow. When I still lived there I loved to hop over the stones and pick leaves to chew on. It's so potent and refreshing. When I would offer it to friends, they would spit it out saying that it's too strong. So way to go Gansey! I think this is telling about his character, he likes it strong, and he really doesn't care what people think of him. And how cool that a teenage boy grows his own mint in a little pot by his desk!
I did NOT know about Owain Glendower (Glyndŵr), but his mythology reminds me of King Arthur--about the being dead but rather sleeping and then rising sometime in the future to go about hero business. Glendower, an awesome man who did tons of good for the Welsh people (in his case it is historically documented, unlike Arthur), did eventually die but his resting place was kept secret (mostly to protect his remains from the British, but then those who buried him probably forgot where they put him! Like...records-wise, written & oral). In the late 1800s, a group of Welsh nationalists decided to create the Arthur-like mythology for Glendower and now he is seen not only as a historical figure, but also a figure of folk legend. He is also now categorized as one of the many sleeping kings --of which I think my introduction was, aside from Arthur, from a Diana Wynne Jones book, possibly Time of the Ghost. Of course Susan Cooper's Dark is Rising Sequence borrows from this mythology as well, and M.T. Anderson's Norumbegan Quartet contains many elements too, including ley lines or fairy paths and under-mountains.


Food in The Raven Boys:
The boys like to go to Nino's, the local pizza place where main character Blue happens to work (why had they never seen each other before?), and order a "large, deep-dish, half sausage, half avocado pizza". Sounds yummies. Below is an easy-peasy, slap-dash recipe for the Raven Boys' pizza of choice. Use your own judgement in the making. Other foods mentioned in the story are tea, fast food hamburgers, pie (from Persephone), something "made with butter" (from Maura), and something "involving sausage or bacon" (from Calla and see pizzas below). Also, if you want to concoct a drink for this meal, how about making some mint tea, with fresh leaves or tea bags, and then chilling it before serving to make a nice mint iced tea. *smacks the lips* Ahhhh. This is Virginia we're talking about, gotta have some iced tea.

Raven Boys' Pizza
Ingredients:
Boboli Pizza Crust
(or you can totally make your own if you want, but then it's not so "slap-dash", now is it?) 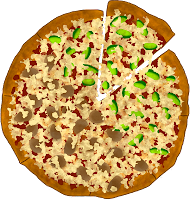 Pizza Sauce
Sausage Links, cooked, sliced in the round, thin
(like the thick kind of links that look like bratwursts/hot dogs. Or you could cook up some ground sausage, but then again, it becomes less of the slap & dash.)
Mozzarella Cheese, shredded
Avocado, cut into bite-sized pieces
Cilantro, fresh, chopped, if desired
Directions:
Preheat your oven to 350.
Spread some sauce onto the Boboli crust.
Layer the slices of sausage on half of the crust (because apparently some of the Raven Boys don't like avocados).
Cover the entire pizza with shredded mozzarella.
Bake until it's done, like the cheese is melted in the center.
Place the avocado pieces on the other half (because it seems like some of the Raven Boys either don't like sausage or are vegetarian).
Sprinkle the avocado side with the cilantro if you want (or sprinkle it on the whole pizza if that's something you can all agree on. We have no idea the feelings of the Raven boys toward cilantro).

If Blue's mom's fiery friend Calla had her way she would serve this avocado & bacon pizza. I'd totally go for that.