Last Tuesday was the Fierce Reads tour stop at the Provo City Library and I was able to attend the blogger meet n' greet before the official presentation. What fun! The five author ladies, published through Macmillan, are wonderful and fun and meshed well with one another. I asked two questions (shown below) that two of the authors later said were very good and unique. I think I blushed.


If you would like to win an official, autographed Fierce Reads tour poster + 5 bookmarks, please enter the Rafflecopter form below!


What is your criteria for young adult literature? What makes a good YA book?
What food would you associate with your book?
Marissa Meyer for Cinder
* Shrimp Wontons
An appetizer served during the diplomatic dinner Prince Kai has with Queen Levana in Cinder.

Check out this cooking video Marissa did for the Apocalypsies blog!

Anna Banks for Of Poseidon
* Lemonhead Candies: That's how Emma gets Gaylen to up-chuck in Of Poseidon. Lemonheads were a big part of my launch party.
Here's a recipe for Lemonead Cookies!

Leigh Bardugo for Shadow and Bone
There's a ton of food in my book!
* Rye & Herring: Inspired by the last tzar. It was a peasant breakfast. It's a pivotal food in Shadow and Bone.
Click here for a Pickled Herring & Rye recipe.
* Burnt Swan w/ Saffron: During my research, I came across some weird foods that the Russian nobles ate, like burnt swan. It's in the book, but I added saffron to it.
Here's a translated medieval recipe for swan, Roasted Swan with Chaudon.

(from eNotes, Russia) "The wealthy indulged in feasts that lasted for hours. Pickled or salted beef, ham, suckling pig, elk, boar, lamb, and rabbit all appeared on the table. Swan was considered the most luxurious of birds, although the wealthy also enjoyed crane, heron, black grouse, hazel hen, partridge, lark, goose, duck, and chicken. Veal was rarely consumed, and the Russian Orthodox Church forbade eating doves, since the birds symbolized the Holy Spirit. Hot and cold soups, noodle dishes, roasts, and sauces were seasoned with onion, garlic, pepper, saffron, and sometimes savory. The combination of sweet and sour so typical of medieval foods throughout Europe was especially compatible with Russian tastes. Rich, dark swan meat was often served with vinegar or a combination of sour milk, pickles, and prunes." Swan meat is also mentioned in the Russian fairy tale, "The Frog Princess".
Visit the "Recipes from Ravka" page on Leigh's blog!

Jennifer Bosworth for Struck
They're running out of food in my book.
* Oatmeal Cookies on a beach.
Here's an oatmeal cookie recipe for you to try.
* Canned food. Rations.

Emmy Laybourne for Monument 14
There's a ton of food in the Greenway that they are locked into.
* Twinkies: Because they last forever.
Exactly. That's why the T.W.I.N.K.I.E.S. Project was created. The anachronism stands for Tests With Inorganic Noxious Kakes In Extreme Situations.
* Pizza
* Stuffed Pancakes
Here's a site that shows how to make several kinds of stuffed pancakes. Like pancake quesadillas!

All of the stories listed below are also available for FREE in the Fierce Reads short story eBook anthology!

Leigh Bardugo
* Short Story: "The Witch of Duva: A Ravkan Folktale" a companion to Shadow and Bone
* Book Trailer:

And here's the one that I made a little while ago.
Emmy Laybourne
* Short Story: "Dress Your Marines in White" a companion to Monument 14
* Book Trailer:


Now for the giveaway!
Please fill in the form below for a chance to win an autographed copy of the official Fierce Reads poster & 5 corresponding bookmarks! That's FIVE autographs from five great YA, debut authors! 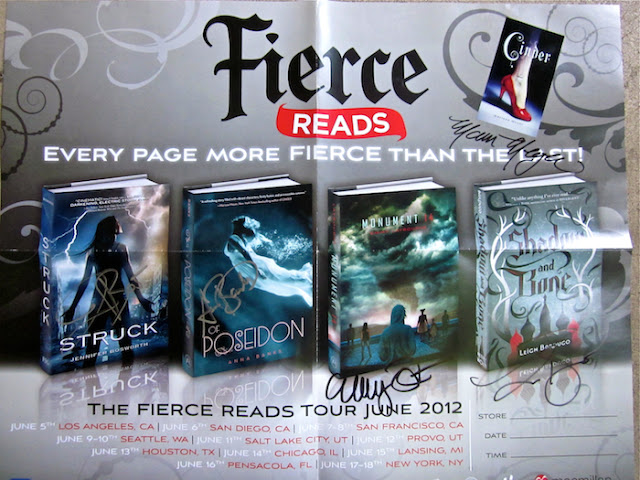