Welcome to my stop on the Cobble Cavern (Flin's Destiny series, book 1) tour! For other tour stops, please click the banner above. And there's a giveaway so don't forget to read through this post to the end!
Originally, the first three Flin's Destiny books were published during March 2010 to January 2011 through Authorhouse, a self-publishing house that provides HC, PB, & E copies. The series had top rankings at Barnes & Noble, and was scooped up by local publishing house Cedar Fort! (For more info. on the original publications, scroll down and/or see Goodreads, book 1, book 2, book 3.)
How wonderful that Erik's dream series (literally) is now being traditionally published! And aren't the new covers by Mark McKenna just wonderful? (Scroll down to see book 2.) Mark is also the artist for two other Cedar Fort youth series; Guardians of the Hidden Scepter by Frank L. Cole (book 2, Elijah's Fire will be released June 12, 2012), and Huber Hill and the Dead Man's Treasure by B. K. Bostick.

There will be five books total in the Flin's Destiny series with book 2, Garden of the Lost Souls coming out July 10, 2012! You won't have to wait long for more Flin action!


“What was that?” Pilt asked in alarm.
“Whatever it is, it’s coming our way, and fast!” Flin said. He searched futilely for a nearby refuge.
Another screeching hiss rose from below.
Flin took the torch and held it out in front of him. “I can see something moving down there!” he said, panic thick in his voice.

What starts out to be a fun field trip to Ireland for Flin and his school debate team turns into a life changing adventure when their bus ends up in an earthquake. Flin and his teammates get swallowed deep into the earth and become trapped under the ocean inside a clear dome where they discover an unknown civilization. Now they must fight their way back to the surface if they ever want to see home again. Join Flin and his classmates on a journey of a lifetime in this thrilling adventure story. 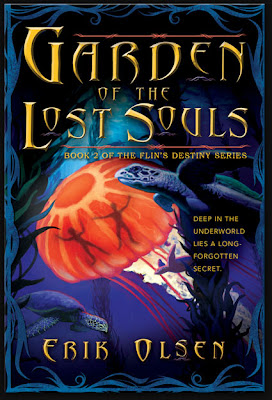 
Flin climbed to the top of the Cathedral and was now pinned against the anemone’s ceiling while dozens of enraged Snazzards scaled up after him.
I can’t climb any higher he thought, desperately looking around for any last options. There’s no place left to go! They’re going to get me! Panicked, he jumped and fell hundreds of feet through the air as the ground raced toward him.
“NOOooo…!” he screamed.

After all he’s been through, it seems Flin’s life is finally getting back to normal—well, as normal as you can get when you’re stuck hundreds of miles under the earth’s surface. But in Cobble Cavern, nothing stays normal for long.
And when Flin and the rest of his classmates are sucked into another adventure, they’ll need more than a little magic to make it out alive. Especially since this time Flin will have to choose between saving an entire village from destruction or rescuing his own best friend!
Packed with action, humor, and tons of twists, this second installment in the Flin’s Destiny series will keep your kids up with a flashlight long past bedtime. Delve deeper into the mysterious underworld in this heart-pounding story that’s bound to become a family favorite.

* Official Cobble Cavern webpage *
Below are the original covers for the first three books in the Flin's Destiny series.
(Click the images to view the Google Books previews!)

Hooray for Cedar Fort publishing! They've been coming out with some great youth titles.
For a look at all of Cedar Fort's upcoming releases for May - July 2012, click here for the official PDF catalog!

Now for the giveaway!
Cedar Fort will email one lucky person an ecopy of Cobble Cavern: Book 1 in the Flin's Destiny Series!
To enter:
* "Like" the Flin's destiny Facebook group
* Leave a comment on this post with your email address and preferred eFormat.
* International
* Ends March 27th @ 11:59 pm
Posted by Diana