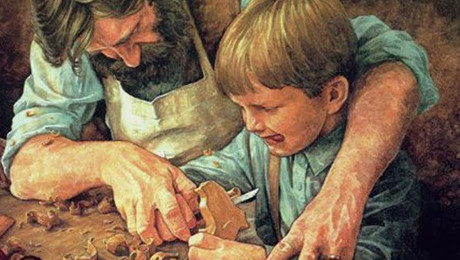 "I truly believe a power beyond me guided my hand. That same power may have been at work when one of the most gifted illustrators I can think of, P. J. Lynch, agreed to illustrate the story. The day I saw the first finished drawings, their power and beauty brought tears to my eyes."
--Susan Wojciechowski, "Notes From the Author" page, The Christmas Miracle of Jonathan Toomey 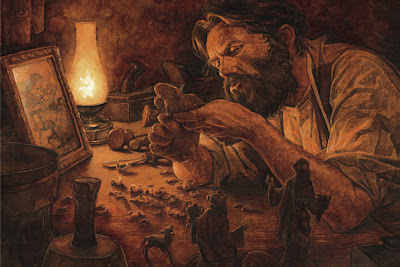 "I can't say whether my work on the book was inspired in the same mystical way that Susan's was, but it is true to say that as I painted, I had no doubts --and that is very unusual for me."
--P. J. Lynch, "Notes From the Illustrator" page, The Christmas Miracle of Jonathan Toomey 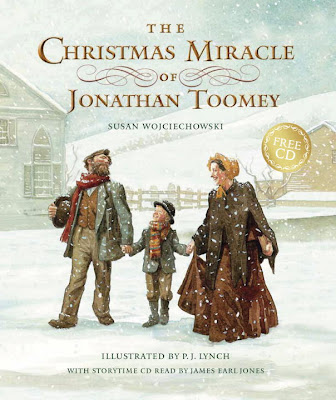 (Two summaries from Goodreads)
Jonathan Toomey is the best woodcarver in the valley, but he is always alone and never smiles. No one knows about the mementos of his lost wife and child that he keeps in an unopened drawer. But one early winter’s day, a widow and her young son approach him with a gentle request that leads to a joyful miracle. The moving, lyrical tale, gloriously illustrated by P.J. Lynch, has been widely hailed as a true Christmas classic.

As full of wonder as Christmas itself, this is a story that will not long be forgotten, one that will be read and treasured for many Christmases to come. A woodcarver's broken and bitter heart warms to the spirit of the season, when he is approached by a widow who asks him to carve a new creche in time for Christmas--and allow her young son to watch. 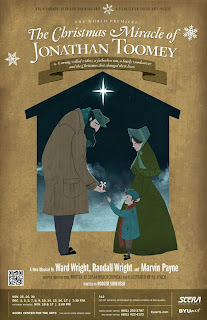 This beautiful story has not only been narrated by the incredible voice of James Earl Jones (the hardcover book comes with a free CD), but has also been adapted into film (2007, see trailer below) and most recently into a musical. The production was co-created by LDS author Randall Wright (The Cheshire Cheese Cat [co-authored by Carmen Agra Deedy], The Silver Penny), Randall's brother Ward, and Marvin Payne. The performance was a collaboration between the BYU Department of Theater and Media Arts and the SCERA Center for the Arts in Orem. I was able to go to the musical with my husband on one of the evenings that author Susan Wojciechowski was present doing signings. Susan was very warm and friendly and apparently "loved" the production. It really was very well done. My husband and I both enjoyed it. (Also, I wasn't positive at the time that the musical Randall Wright was the author Randall Wright. He was in the musical as a guitar player. I could have met him! But again, I wasn't sure, and we were on a time crunch, so I have yet to meet him and get his autograph. I hope to someday though, he is very talented.)

To see pictures of the production, please visit the musical's Facebook page. 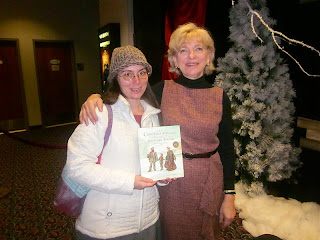 "For me, the most humbling and powerful reward of writing is that when someone reads my work, I become connected to that person; I become a part of their lives even if just for a few moments."
--Susan Wojciechowski, "Notes From the Author" page, The Christmas Miracle of Jonathan Toomey
Below is the trailer for the movie adaptation of The Christmas Miracle of Jonathan Toomey.
Posted by Diana