Remember "Rolie Polie Olie" (TV series and book series)? Or "Meet the Robinsons" (movie based on the book A Day with Wilber Robinson)? Or Dinosaur Bob, or Santa Calls? Or Robots (movie)? Those were written, illustrated, and created by William Joyce (sometimes with some help). He's got his hands into both books and movies for children.
In honor of Saint Nicholas Day today, I'd like to feature Joyce's new series, The Guardians of Childhood, which is being released in both picture book and novel formats.
The first picture book in the series is The Man in the Moon (see description further down) and the first novel is Nicholas St. North and the Battle of the Nightmare King (pictured left). There will be six novels total, the next of which will be E. Aster Bunnymund and the Warrior Eggs at the Earth's Core! released in 2012 (I'm not sure how many picture books there will be). AND a movie is slated for Winter 2012 tentatively (or maybe permanently) called "Rise of the Guardians". Huzzah! (Another Joyce book, The Leaf Men, is in production to become a film for 2013) 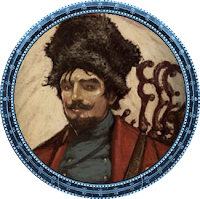 (From Goodreads)
Before SANTA was SANTA, he was North, Nicholas St. North—a daredevil swordsman whose prowess with double scimitars was legendary. Like any swashbuckling young warrior, North seeks treasure and adventure, leading him to the fiercely guarded village of Santoff Claussen, said to be home to the greatest treasure in all the East, and to an even greater wizard, Ombric Shalazar. But when North arrives, legends of riches have given way to terrors of epic proportions! North must decide whether to seek his fortune…or save the village.
When our rebellious hero gets sucked into the chaos (literally), the fight becomes very personal. The Nightmare King and his evil Fearlings are ruling the night, owning the shadows, and sending waves of fear through all of Santoff Clausen. For North, this is a battle worth fighting...and, he’s not alone. There are five other Guardians out there. He only has to find them in time. 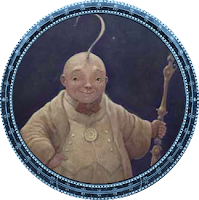 (From Goodreads)
Up there in the sky.
Don’t you see him?
No, not the moon.
The Man in the Moon.
He wasn’t always a man.
Nor was he always on the moon.
He was once a child.
Like you.
Until a battle,
a shooting star,
and a lost balloon
sent him on a quest.
Meet the very first guardian of childhood.
MiM, the Man in the Moon.

*And here's a great radio interview with William Joyce that's 26 + minutes!
*Please check out the uber-cool Guardians of Childhood website for more information on and pictures from the series! Seriously. The site rocks. There are even printable trading cards! 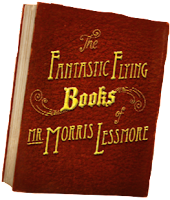 William Joyce has also started an animation studio called MOONBOT. Through MOONBOT, Joyce has created a short film called The Fantastic Flying Books of Morris Lessmore that has its own website (you can purchase the movie from iTunes through a link). There is even a Flying Books app!