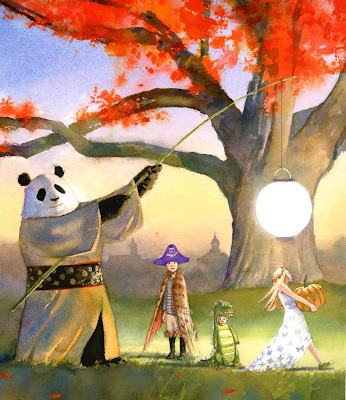 Jon J. Muth is the illustrator of at least eleven books for children, five of which he also authored. Three of those are the Zen books staring Stillwater the panda.
Jon lived and worked in Japan for a while and wondered one day,  "What would it be like to live down the street from a Zen master... who happened to be a Giant Panda?" That's how the Zen series was born beginning with Zen Shorts (wherein Stillwater appropriately wears shorts), then Zen Ties, followed by the third, Zen Ghosts.
Ghosts is filled with beautiful, lush watercolor illustrations (I mean just look at that over there on the left!) along with a creepy story based in Asian folklore. 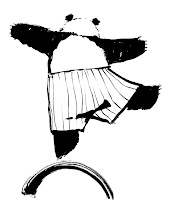 (From Goodreads)
It's Halloween.
The trees are ablaze in fiery reds. Excited children don colorful costumes. And there's mystery and fun around every corner!
When Addy, Michael, and Karl finish trick-or-treating, their bags are brimming with treats. But the fun isn't over yet. Their good friend Stillwater the panda has one more special surprise in store for them. A mysterious visitor is about to tell them a spine-tingling story -- one that will fill each and every reader with wonder. 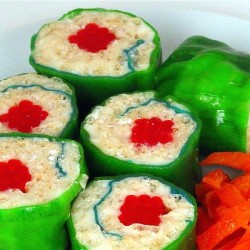 Now for the recipe. Get this -IT'S CANDY SUSHI!

Here's one candy sushi recipe to go right along with your zen.
If you'd like step-by-step pictures, please go here. 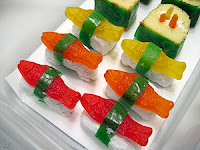 Get creative! Use twizlers, swedish fish, gummy worms, fruit leather, fruit roll-ups -heck, you could even use cocoa puffs if you wanted to get really crazy.
If you don't want to mess with crispies at all, you could go the twinkie route and simply wrap the roll-up around a twinkie, and then slice it carefully into sushi sizes. Then press little colorful bits of chewy candy into the creamy center.
If you have tiny cookie cutters, you could cut shapes out of the roll-ups and turn those into sashimi (the rice rectangle with fish on top -or whatever on top).


This yummy project would be super fun to do with your friends or your kid-Os! Give it a try!
Posted by Diana