Writerly Saturday: Dan Wells Tells About Ideas: How To Get Them & What To Do With Them 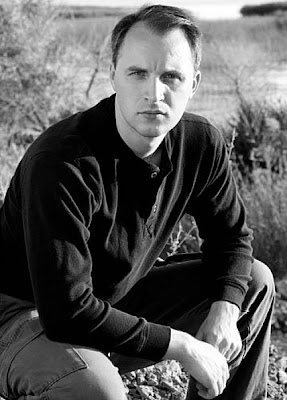 LDS, teen horror author Dan Wells was the key note speaker at this year's UVU Book Academy conference (Oct. 6th). He is one funny guy. He joked that if his presentation started going badly, he'd fake a message from his pregnant wife and leave in a hurry (his wife was very much pregnant at the time. Dan has since added a little baby boy to his family -congratulations!).

He didn't have to worry though. He gave an awesome lecture about ideas (and his wife didn't go into labor during it). Yes, those pesky things that many people wonder where they come from. There is some kind of assumption that writers must be skilled hunters with special idea-catching equipment.
Asking, "where do you get your ideas?" is a broad question most writers don't enjoy answering (it's different if you ask about a certain title like, "where did you get your inspiration for such and such book?" because you're simply curious and love that book).
Dan explained that some writers resort to flippant answers (from a newsletter, a talking dog). And some authors give very specific answers, but that answer is useless if you want to learn something about getting ideas (because the answer is so specific and just for that one book!).
Dan Wells continued:
The reason that question is so hard to answer is because we don't really think about it. Ideas are everywhere. This talk (Dan's lecture) was inspired by the idea question a guy asked me during a presentation. I said, "Dude, where DON'T you get your ideas?".

There is a fundamental shift between people who write and those who don't.
It is not about ideas -it's about writing those ideas into stories.
Find a seed.
For fiction, it's easy to find ideas in the form of a story (Dan's example was from the movie "The 6th Day". He's now halfway through writing a novel inspired by a basic idea from that movie. It can't possibly be more different than the movie, he said -but it's an example of an idea made into a story).
You can get ideas from art forms other than movies too. Even the news. Ideas are all around you.
Concerning news stories, they are "idea aggregators". Life, jobs, friends, etc. You don't need big world changing events because you're writing about people. I'm not suggesting you drop people fully into your story. Just take one trait and mix it with others. The world, culture, history, religion, pay attention to ideas that are different than your own. Then get new ideas. Science -physics, astronomy, computers. Watch episodes of Nova now and then (Dan told us about an episode about the human brain that spun his mind full of ideas). Ideas are cheap. They're all around.


Practice.
When you plan on running a marathon your body needs to be in shape. You think about running the marathon. You tell your friends about it. You might even blog about your experiences. You start with small distances not because small is the goal, but because small distances are the building blocks to the marathon.
Your first attempt at writing will not be a published work, just as a jog around the block is not a marathon. Your first book will not sell. This is me liberating you. Treat it as practice and learn from it.
You need to practice coming up with ideas everyday. Don't wait for the best idea. Go with what you've got. Write what excites you. Don't worry about not doing it justice.


Conflict.
This is the most important part of a story. If you take away the conflict you have no story. Stories have obstacles and problems that need to be overcome. Take an idea and figure what ways it can cause a problem.
Ex. An English bulldog goes funny when you pick things up. Wonder "what if...?"
The core idea may be silly, but if you think about the problems, it gets interesting.


Characters.
A story is not a vacuum. It's about how characters respond. As long as there's a person in there, we have human interest. What kind of person would use the idea in an interesting way?
Ex. The news. South Eastern Asian slave factories. It's not a story by itself -just an idea. You need to put a character into it. The character you pick completely changes the focus of the story. Any story, in any genre, starts with an idea and you add characters until it sparks.


Combination.
"Strange tractor". Mush two ideas together.
Ex. bullets + runes / vampires + Mary Kay.
I love the ideas of cloning. You're not the only you. But there are lots of books about that. How can I make something different? I worked for three different cosmetic companies. Cloning + cosmetics. But how? It's hard but intriguing. Lotion? But how would that make a clone? How do the puddle of lipids get raw cells? Hand lotion that has genetic code, then changes your code when you put it on. You become someone else (in body). Why get a nose job or skin care if we can just give you a new nose and perfect skin? And doctors could cure cancer and other congenital diseases. Who owns this technology? There are so many conflicts this could create. I had to go back and look at the characters.

(And the homework:)
You have to practice everyday. Keep a journal. Everyday write five story ideas about the world around you. It will become second nature sooner than you think. Then you'll respond (to the idea question) "what are you talking about? Ideas are everywhere."

Dan then began an idea session with the audience. Someone shouted out a basic idea: Buying a dog.
What is the conflict?
It's an alien dog, a werewolf, it has rabies, you get stuck on the freeway after buying it, it's stolen, dogs are extinct (so you bought it in a special black market).
What about the characters?
The person buying the dog, the seller, the dog, the neighbor's kid, the mail man.
What's the combination? Buying a dog + pie! Maybe that's why they are extinct. Dog pies (oh no!)
Radioactive monster slober. Everyone gains X-Men powers.
(Then it all went downhill when someone brought up radioactive urine. But you get the idea -about ideas.)

Dan gave an awesome, engaging lecture. I thought the points he presented could not only help with writing, but also make for a fun game with family and friends.
Put random ideas into a hat or just shout them out. See what conlifts, characters, and combinations you come up with. You'll have a wild time and maybe even get sparked with ideas you want to use in your writing.


If you don't already have a story in mind for NaNoWriMo, give this a try!
Posted by Diana