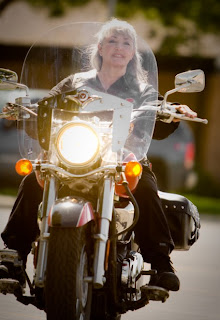 LDS, YA author Dene (dee-nee) Low (Laura Card) is a wild woman. She has three degrees, a pilot's license, has won three book awards, and has put over 60,000 miles on her motorcycle. And she teaches English (she was a professor at BYU, now she mentors at Western Governors University). And she's a writer. (and she's cute and has really long, pretty hair. At least it was long when I saw her last.)

Back at the end of June, Dene Low gave a presentation at the Orem Library as part of the Teen Reads program.
Dene shared information about her Victorian mystery story, Petronella Saves Nearly Everyone, first in The Entomological Tales of Augustus T. Percival (including a few interesting bug facts), as well as writing advice and a teaser from one of her works in progress.

Now, on with the presentation:
Three young people in the audience tried to read the full title of Dene's book. They gradually got better at it (it's a toughy). Dene then went on to explain what the title means:

There is an uncle in the story who becomes an obsessive bug eater, so I had to find out a lot about bugs. Look at the book cover (left) and you might see something that a lot of people miss. There's a funny story: a librarian who thought Petronella was a period romance was so surprised to find bugs in the story that she closed the book! But the cover has bugs all over it. Jen Corace (Little Hoot, Hansel & Gretel) did a wonderful job (see the illustrations throughout this post). There are bugs throughout the book at the beginning and ending of each chapter.

Dene then showed pictures of bugs on her PowerPoint slide show. She did so much research on bugs for Petronella. 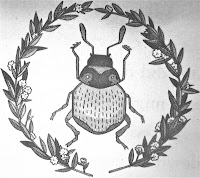 Some bugs are pretty, some are funny, some don't even look like bugs, and some bite us. People can bite bugs too. They make lovely meals.
The Native Americans in Utah gathered the crickets and combined them with current berries to make bread.
The word for bug eating is entomophagy. Some scientists believe that this would solve the world's hunger problems because there are about 20,000 edible bugs. 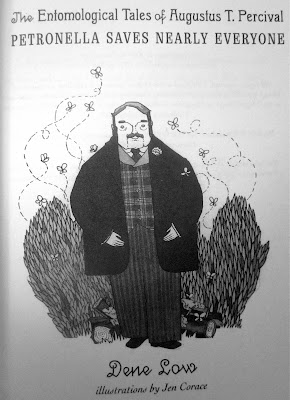 Q: How did you get published?
A: I sold this book twice. It was very discouraging. Now it's being sold a third time.
I went to a writing conference and an agent wanted to take the story to NY. I went through the re-writes, then never heard back from the agent. Turns out she quit! So I sent out 17 queries, then Kate O'Sullivan and Houghton Mifflin bought it. It was going to be a series. The second book is almost finished. Then Houghton Mifflin cut a lot of books because of the economy. So now I'm looking into a European publisher.

Writer's Block:
I teach at BYU and UVU. My 15 yr. old nephew said he was stuck in his writing. So I did an exercise with him and afterwards he could write again. Free-write. You write until you are told to stop. Write about anything you want for about five minutes. Repeat this exercise four or five times. Don't write the same paragraph over and over.
There is a chemical released in your brain when you move your hand and your eyes are looking at the page. you've been practicing reading and writing since you were little and your brain knows how to do it. When you have writer's block, your brain is not functioning how it should so this exercise triggers loose the chemical and gets the brain going. Usually the first words are "garbage out", then by the third or fourth time your brain starts taking things seriously. A lot of writers do this everyday to get going. 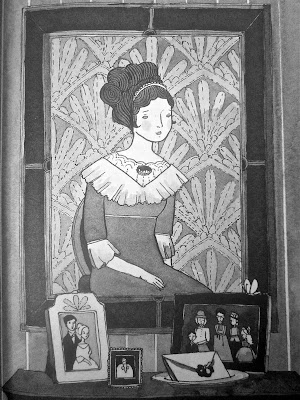 Q: The idea for a book -where do you start?
A: Generally you start by writing down ideas. Usually the first 40-80 pages you need to chuck because it's just for the author to know. Just start brainstorming, then ask where would the most interesting place be to start the story? In Petronella it starts when the uncle has just become an obsessive bug eater.

Q: (I'm not sure what the question was...)
A: My dissertation for a PhD was 540 pages long so I got pretty bored with it. One day this story popped into my head. It sounded like the most ridiculous thing. I had never heard of entomophagy before so I researched it a lot.
My dissertation was about the Japanese Americans during WWII (I hope this is correct). I like history but it's not really popular right now.
(At this point Dene read from one of her works in progress about a 17 yr. old, Japanese-American boy in one of these internment camps. He has been having weird feelings in his body and feels like he needs to stretch...read the summary of the story here on Dene's website.) 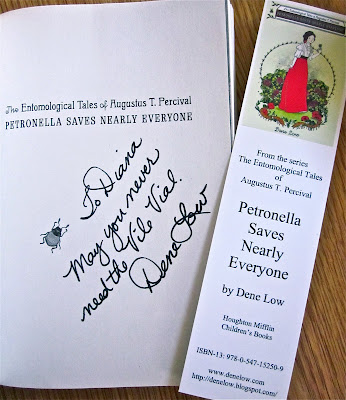 Q: Where do you get your ideas?
A: They just come. Carry a notebook around with you. Pondering is an also an important part. Here's an assignment for you, listen to the people around you. Sometimes they say the strangest things. I keep a notebook in my swimming gear and write down what I hear. Now I have about 2 pages full of funny things. Only one student I have given this same assignment to has ever gotten in trouble.

Dene also brought Petronella word searches for the audience to do during the presentation. It was pretty cool. I love word searches! Those who finished first got some colorful, little, toy bugs. Nice touch, Dene!


"It's a mystery set in historical time. All of the facts are accurate -only two bugs are made up. By the end of the book nearly everyone has been kidnapped." -Dene Low
So If you'd like a light, clever, Victorian-esque read, pick up Petronella Saves Nearly Everyone.
And remember, there are bugs inside.

(Below is a clip from the audio version of the book.)