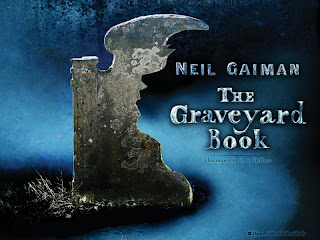 Inspired in 1985 by his then two yr. old son riding his tricycle around a graveyard, award-winning, British author Neil Gaiman (Coraline, Stardust) decided to write a Jungle Book type story set among the rows of the dead. The subsequent story, The Graveyard Book, was published many years later and won the Newbery award in 2009. 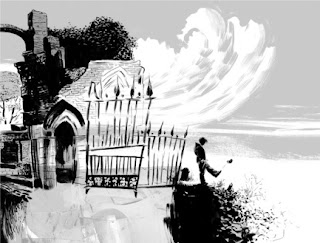 The atmosphere of the book is furthered by the haunting black and white illustrations of Gaiman's long time collaborator David McKean. David has illustrated several of Neil Gaiman's youth books -Coraline, Wolves in the Walls, The Day I Swapped My Dad for Two Goldfish, and MirrorMask (which is also a movie written by Gaiman and directed by McKean). In The Graveyard Book, the combination of Gaiman's text and McKean's artwork is as perfect as always: creepy and oh-so-eerie.
So go find The Graveyard Book for yourself and the 9 yr. olds and up in your life. Consider giving it for All Hallow's Read (see below).


(From Goodreads)
After the grisly murder of his entire family, a toddler wanders into a graveyard where the ghosts and other supernatural residents agree to raise him as one of their own.
Nobody Owens, known to his friends as Bod, is a normal boy. He would be completely normal if he didn't live in a sprawling graveyard, being raised and educated by ghosts, with a solitary guardian who belongs to neither the world of the living nor of the dead. There are dangers and adventures in the graveyard for a boy. But if Bod leaves the graveyard, then he will come under attack from the man Jack—who has already killed Bod's family . . .
Beloved master storyteller Neil Gaiman returns with a luminous new novel for the audience that embraced his New York Times bestselling modern classic Coraline. Magical, terrifying, and filled with breathtaking adventures, The Graveyard Book is sure to enthrall readers of all ages.

Visit Neil Gaiman's Official Website for Young Readers to learn more about his books.
All Hallow's READ. Read Neil's proposal and watch his video below. GREAT idea. I fully support it.
Posted by Diana