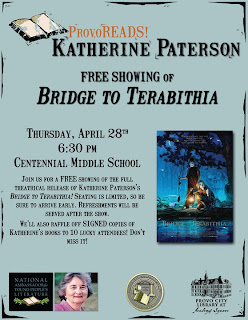 Waaaaaaay back in April, B and I drove to the Centennial Middle School here in Provo for Provo City Library's big screen showing of the Bridge to Terabithia (based on the book by Katherine Paterson, the current Library of Congress's National Ambassador for Young People’s Literature). The event also included raffle drawings (more about that further down).
We got to the school way ahead of time because the advertisement said to, but there ended up being more seats than had been expected and only a handful of people ended up coming. That was great though. B and I were the only ones in the auditorium for a long while (or should I say theater? It was VERY nice; soft, movie-type seats, a stand-out-red curtained stage) so we sat and talked and talked. Then eventually others arrived and it was time to start.

Bridge to Terabithia is a very well done movie. It's a Disney and Walden Media production (who also collaborated for The Lion, the Witch, and the Wardrobe), directed by Gabor Csupo (who directed The Secret of Moonacre based on the book The Little White Horse). I first saw Terabithia at the end of 2007, when I returned from missionary service in California. But this was B's first time seeing it. He really liked it even though it was very sad.
And guess what? We BOTH won the two grand prizes of autographed family read-aloud editions of Bridge to Terabithia (along with a bookmark and a little notebook). Then several other signed Katherine Paterson books were given away. Pretty much everyone who came got something -except-
Dear B decided to give his copy of the read-aloud to two young girls who hadn't won anything. At first I said no! I can do something with it (something like save it for a giveaway whenever my blog reaches a decent number of followers)! But then I knew that was so stingy of me so I agreed with him that it was a kind thing to do. I just hope that those girls were sisters! They really were bewildered when B gave them the book. 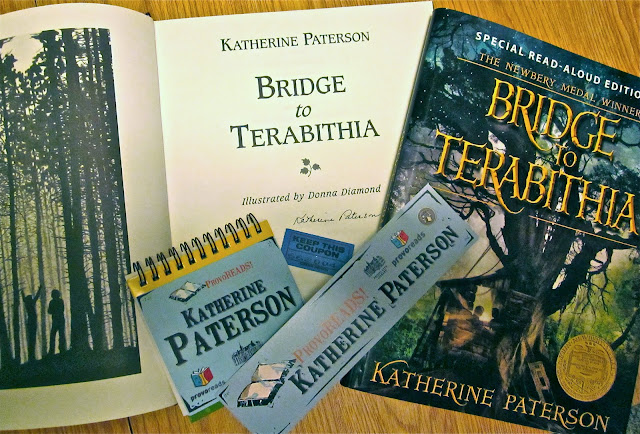 Then we all filed out and were given some twizzlers. 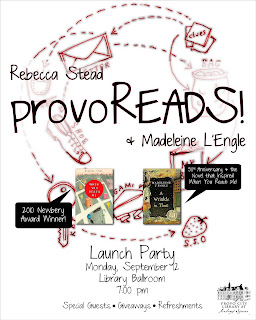 Courtney Lowe (remember, the PCL PR woman extraordinaire) announced that Newbery award winning author Rebecca Stead (she's cool! I met her at the BYU Symposium on books for Young Readers in July) is going to visit the Provo Library near the beginning of 2012 (perhaps March?). And wouldn't you know it! The new ProvoREADS! focus is Rebecca Stead and her book When You Reach Me along with Madeleine L'Engle's book A Wrinkle in Time (because A Wrinkle in Time factors heavily into Rebecca's book).
SO, COME to the Provo City Library Ballroom Monday, September 12th @ 7 PM for the ProvoREADS! celebration of When You Reach Me and to honor the 50th anniversary of A Wrinkle in Time. The Library will even be bringing out its TIME MACHINE, along with special quests (hmmm...) and refreshments.

(Subsequently, did you know there is a Wrinkle in Time movie? I watched it on Netflix streaming. Not bad. Some great quotes of course. [The Secret of Moonacre is on Netflix streaming too])
((Also, how cool is my husband? He knows how I love book and movie combos so for my birthday he gave me the Bridge to Terabithia DVD! Oh how I love sets and things that go together. *sigh*))
Posted by Diana