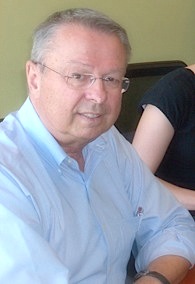 This post is about a two-part visit that I had with BYU illustration professor Richard Hull (the first visit was sometime in April and the second was mid-May). He was very nice and talkative both times. Like Robert Barrett (blog post here), he is a fount of information concerning the art and the illustration world. During my first visit he even explained the history of magazine illustration! He will be retiring in August after teaching for 24 years at BYU, the summer term will be his last time teaching (I'm so glad that I had a chance to meet him!).
He said that his plans for retirement in the way of art will include plein air painting with friends who are also former students, perhaps finishing a book for (or with) a granddaughter that he started a long time ago, and learning more about e-publishing and digital illustration as well as starting a website or blog. He'd also like to "re-imagine" himself as an artist. Throughout his time as a professor he has become more practiced and partial to figure drawing and he'd like to continue focusing on that. I saw some of his paintings in his office while I was there, such as a painting from life of a closeup of three BYU girls on a boat during a trip to Africa. It was amazing! He is definitely a great figure painter.
Before becoming a professor at BYU, he worked for the Ensign magazine in graphic design for years . He did a few illustrations for the magazine but wanted to keep that separate from his job as designer. He did text book illustrations at one point but didn't really like it very much. He also illustrated children's books years ago (which is why he is here on this blog!) but didn't care much for the politics of it all, having to be politically correct and non-offensive to parents (I can imagine that could be very frustrating!). As explanation, he told me about a companion book that he did for the story of Tom Sawyer. In the picture for the fence painting part of the story, Mr. Hull had to change his illustration to include girls and multi-racial children and even parent supervision. No tree climbers allowed to be depicted because the kids looking at the picture might climb trees in real life and fall, etc. (yeah, because they don't do that anyway without looking at pictures). Despite all of that stuff, he has illustrated several children's books (five perhaps?) including a book of fairy poetry by Laura Ingalls Wilder, which is the book that he autographed for me (actually, for my daughter, but she has no idea being only eleven months. Her signed book collection sure is growing though!).
For my first visit, I hadn't yet received the fairy poems book in the mail, so I took a homemade book plate for him to sign. After our conversation he very kindly told me to visit again when the book comes in so that he can sign in it directly, and he said that he would still draw something on the bookplate for me too. So the book finally came and I did visit again. We talked some more, but mostly I stared quietly around his office from my spot on one of his swivel chairs while he drew in the book and on the bookplate. When he was done, I commented on the children's books he had in a certain place on his shelves. He pulled many of them out to show me. I asked if some of them were from students of his, and many were: Cari Hepworth, Guy Francis, Will Terry, Fumi Kosaka, Julie Olson, Nathan Hale, Tara Larsen Chang, and Jesse Draper. He showed me other BYU illustration student's published books, but I didn't write them all down. It was impressive to see so many successes though! He also had The Invention of Hugo Cabret which I pointed out was being made into a movie with Jude Law. David Wiesner's Three Little Pigs was on the shelf along with a couple of books by Gennady Spirin, who will both be guests at the upcoming BYU Symposium on Books for Young Readers. At one point he pulled out Shadowville by Michael Bartalos and told me that he really loves his work. 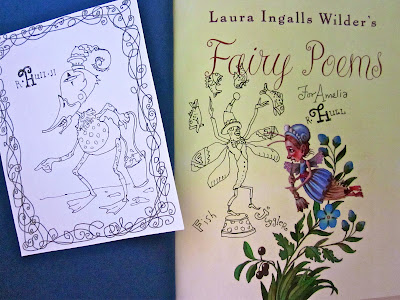 I appreciate the time he took to meet with me twice to talk and even draw two little pictures (the book and bookplate). He seemed kind of bogged down with getting things done in his office, but I hope that drawing those little pictures and talking with me was a small release from all of the things he was doing.