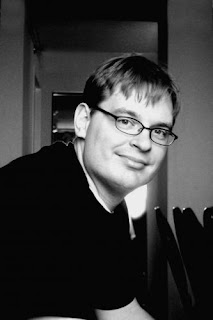 I made it! I got back about an hour ago from the Matthew Kirby book signing at the Orem Barnes & Noble. This was my first in-store book signing! I wasn't sure what to expect so I called the store earlier and asked them to hold a copy of The Clockwork Three (Mr. Kirby's first publication) for me. This has been one of those books that each time I pass in the campus bookstore I pause, let the temptation to buy it flit over me, then move on, waiting for the time to come that I will need it for autographing (that has been what has guided my recent purchases). So last night when I discovered this local signing event it became time to own this book (too bad I didn't find out sooner or I could have saved $5 or $6 Amazon, but oh well). So there Matthew Kirby was, sitting at the front of the store behind a small table laden with a few stacks of books.
I mustered up my courage (yes, I needed to muster. 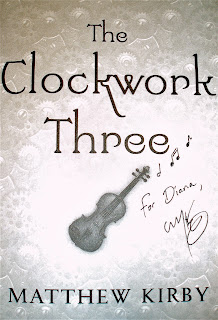 This is part of the Book Adventures; being brave. Well, it's being brave for me anyway). I held out my copy of the book, he asked who to make it out to (I answered), and then that was it! I wanted to ask something but I couldn't think and I felt awkward so then I just walked away! Well, I walked away into the children's book section, then around to the teen and fiction sections, then back over to Matthew Kirby because I finally had a question and the coast was clear! I had read that he got a degree in history, then a masters in school psychology, and that he is currently working for a school district. My question was, "so how did this book come about?"
Since the age of thirteen Matthew Kirby has wanted to be a writer. As he got older though he realized that he would need a more stable job, especially in order to one day provide for a family. So he decided that working in the school system would be a good choice because of the schedule (summers off, can't go wrong there!). While he was in graduate school the idea for The Clockwork Three came to him but he had to put it aside and focus instead on writing his thesis. These many years later, The Clockwork Three is published and Mr. Kirby's next book, Icefall, will come out October 1st. He has already started work on a third novel. He says that at this point he has two full-time jobs, his work in the school district and then his work as a writer. I'm sure he is looking forward to the summer months to focus on his two loves, his wife and his writing.
I enjoyed my first in-store book signing! I'm glad that I had the opportunity (and courage) to talk with Mr. Kirby for a short while. I am very much looking forward to reading his book and the ones to come. Three autographs since the beginning of the Book Adventures! Many to go! I have a busy few months ahead with all of the events going on. Happy, happy busy!


Here is the book trailer for The Clockwork Three
(is it not awesome that publishers make BOOK trailers?)