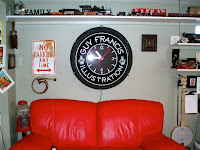 Yay! Today I visited with children's book illustrator Guy Francis in his home here in Provo, UT! This was an activity of the BYU Illustrator's Association (of which I am technically still a member though I am no longer seeking an illustration degree [life happens, you know?]) activity. This morning a handful of club members met at Guy Francis' home, ate a breakfast of muffins and fruit (provided by the club), and were given a special tour of his eclectic basement studio. 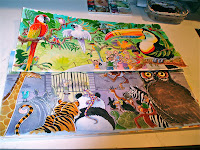 Guy Francis has illustrated numerous picture and young reader books, including the most recent, The View at the Zoo by Kathleen Long Bostrom (two original paintings from the book are shown to the right). Guys' basement studio is filled with a variety of toys, nick-knacks, antique & vintage items, personal 3D creations (see banjo pig below), friend's artwork, and of course his art tools, projects, etc. He even has a tank of beautiful salt water fish and anemonies animones, aminomies, amino-meno-meees, (spell check!!!) anemones. They looked awesome (sorry I didn't take a picture!). Guy believes in providing his children (2 boys, 2 girls) with opportunities to be creative, that is why he has created such an environment, even keeping scraps of wood and anything else that could be useful in constructing something interesting if they so desire (which one daughter particularly does). He also designed the studio so that his children could have space in which to spend time even when he is working on illustration projects. As you can imagine his kids love that room (though one son is very leery of the old life-sized skeleton from Guy's father's medical practice). His home is a place in which his whole family can flourish (did I tell you that he & his wife keep a big jar & a couple of large bowls of crayons, markers, & colored pencils on their dining room table? Now that's a keen idea)! Back to the children's book topic, Guy can crank out great, vibrant illustrations for other people's words but his dream is to write and illustrate (& get published) his own picture books. I'm sure it's not too far around the corner! 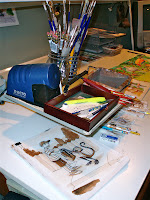 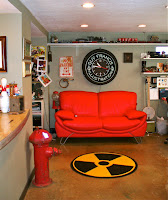 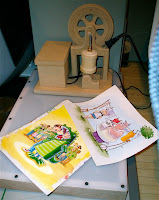 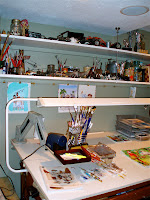 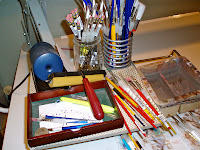 Guy Francis admires the work of fellow artist Scott Gustafson, having written a report on Scott when Guy was still in school. He said they talked on the phone a long while. Guy has a beautiful print of one of Scott's paintings in his living room (one of the girls in our group said that Scott Gustafson may be LDS and that he visits one of the local art galleries relatively often. I have not found anything about this on the internet, so I'm not positive. That would be very awesome though). Another interesting fact about Guy Francis is that he is part of the all male, Provo-based, writing & illustration critique group, Brotique. Other members include Jed Henry, Rick Walton, Will Strong (who used to be the BYU Illustrator's Association president), and Will Terry, just to name a few. In the past they have held several community events such as studio tours, family nights, art demos, and gallery shows. That's a pretty neat concept; a bunch of cool, artsy guys going about doing good. I have not found any events posted yet for 2011 though. 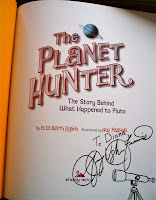 Before we left, Guy signed my copy of The Planet Hunter by Elizabeth Rusch (which he illustrated of course). He even drew a little telescope under his signature! He told us that all of the night sky backdrops in the illustrations are actual images from NASA. He also said that Michael E. Brown, the astronomer whom the book is about (whose brilliance lead to Pluto becoming a dwarf planet [hey! Don't hate on him! The book explains it all!]), is such a star (haha) in the scientific community that he can pretty much use the Hubble Space Telescope whenever he wants. Others have to wait months and months.
So here's to another autograph from a great individual who is making the world of children's literature a better place. My visit with Guy Francis was really fun and I'm so glad that I had the opportunity! My husband tells me that my excitement over children's books is called "geeking out" (see definitions 3 & 4) Well, geek out oh, Me, and geek on. 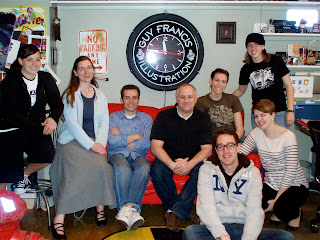 P.S. I got my free ticket for the upcoming Brandon Mull lecture!