Okay, I'm doing a horrible job at keeping up with this blog. I have not been doing a horrible job at keeping up with my Book Adventures though (today, tomorrow, this upcoming Thursday, Friday, Saturday, Monday -whew! There's a lot going on around here!). This post is about the Brandon Mull lecture that took place a week ago at the Provo City Library. It was an awesome first library lecture for me. First off, I wasn't sure how early I should get in line so I arrived at the library around 5PM (the lecture wasn't until 7PM). Needless to say I was the first and only one in line for quite some time (that is probably because Brandon Mull is local and everyone who is interested has already seen him like twenty times. Okay. I'm exaggerating. Maybe ten times. And I say again, what a great place this is!). That was okay with me though. I had picked up a copy of Brandon's newest book, Beyonders: A World Without Heroes, and was happily reading it while I waited.
Leading up to this lecture day, I had started to read his book, The Candy Shop War because it was a stand alone novel (he is best known for his Fablehaven series, but I didn't particularly want to get into buying all of them. I plan on checking them out of the library at some point. I simply wanted a book for him to sign. I later learned though that Brandon has plans for a Candy Shop War two). Honestly, I found the book to be a bit dragging. It probably picked up later on, but it was just too slow a pace to hold my attention. That is probably because it is for young readers (younger than the readers of  young adult books. I believe this type is called a middle-grade novel). I do plan on finishing it someday (and getting him to sign it), but I began to read Beyonders and was very pleased with it. A boy falls into the gaping mouth of a hippopotamus for crying out loud. AND he is transported to an alternate world through said hippo's mouth. THAT is pretty interesting. The premise for the book (and the two following books yet to be released in the series) is the concept of what it means to be a hero and there are many situations for the main character to discover the answer (or answers).
Eventually other people started to show up. Small children ran around the area, excited and loud and about to fall down the stairs. At one point two or three ran down, then seconds later about six came back up. that's Utah for ya, I guess. I made friends with the mother and young teenage son behind me (of course I can't remember their names though, you know me). At 6PM we all walked (and frolicked) up the stairs to the ballroom where the lecture was to take place. I had first dibs on chairs because I was first in line so I chose the froooont of course. After a couple of library personnel took care of all the technical stuff for the presentation the lights dimmed and the show was on the road. I pulled out my trusty pen and handy-dandy tiny notebook and began to scribble. This is what it was:

Concerning Fablehaven (the first book in the Fablehaven series), it took Brandon Mull about five months to write while he was working as a school teacher. It is in development to become a movie but the process has been so long that it is pretty much lingering in someday movie limbo.
In answer to a common question he is asked, Brandon described his most embarrassing moment. As a young boy at the end of a school day he was rushing towards the downward stairs to get to the school bus. As he neared the top steps he swung his very heavy backpack out in front of himself, creating an unstoppable force of momentum. This caused him to fly eight steps, land on his stomach, and slide into the wall at the stair bottom. Since it was a busy time of day around the school exits, many, many fellow students saw what happened (or simply saw him fly out of nowhere and collide with a wall).
Next Brandon mull told about some of his book tours. He said that writers need to absorb details. For example, in Russia he saw the joint coronation throne of boy-czars Peter the Great and Ivan V. It had a compartment behind it from which their sister, Sophia, would whisper to them how to rule the kingdom. In Alaska he was allowed to ride on a dogsled. While in Philadelphia he was treated to a modern dance interpretation of his Fablehaven books. He also mentioned Hawaii but I can't remember what he said he absorbed there.
Onto to the meat of the presentation, Brandon began to talk about his new series, Beyonders (this event was not just a normal lecture but a part of his Beyonders kick-off tour). He asked the audience to name some of their heroes. Many people said their mothers. Brandon said that two of his heroes are his grandfathers (both sides) who fought in WWII (as a side note he explained that this is why grandparents factor into the Fablehaven series). He went on to mention several characters that most people would consider heroes; Frodo from The Lord of the Rings series who is small and weak; Achilles and Odyseus from Greek mythology, the former having a physical weakness and the latter being a trickster; Superman, Batman, and superheroes in general; and national heroes. He then asked the follow-up question: What makes a hero? Fantasy does it best, he said, because fantasy explores heroes. Just because someone is strong doesn't necessarily mean that they are good. A hero is someone who stands up for what is right. Beyonders looks at heroes in a different way than how they are normally viewed. The antagonist in the series doesn't want to kill the heroes, that would be too easy. He wants to break all heroes. His goal is to "wreck the whole idea". many heroes in the alternate Beyonder world come out of retirement, motivated by two 13 year old catalysts.
Also in Beyonders, Brandon Mull wanted to introduce creatures not found in his Fablehaven series (which centers around a refuge for magical creatures). To do this he came up with his own unique and new creations. One example he gave was a race of beings who have seeds at the base of their skulls so that when they die, the seed sprouts and grows into an new body for them. Thus they have a constant cycle of life.
Next, Brandon read the first paragraph of the prologue to Beyonders out loud. He wanted to give us a sense of the broken heroes that the story deals with (it is called A World Without Heroes after all).
The prince dangled in the darkness, shoulders aching, ancient manacles digging into his wrists as he tried to sleep. The chains prevented him from lying down. Whether it was truly light or dark he could not say, for his enemies had stolen his sight.
Beginning with the first chapter the book goes into a 13 year old point of view so the tone lightens.
Brandon began working on the Beyonders series about ten years ago, even before Fablehaven. This first book, A World Without Heroes "puts the pieces on the board".
He then showed us the official book trailer. It is really awesome (it is. I wrote that in my notebook)!

At the end of his presentation, Brandon Mull opened the floor up for questions. These are the questions and answers:
Q: What do you listen to while writing?
A: It depends on my mood. The song must be familiar so that i don't pay attention to the words.
Cake (when it's clean), The Smiths. I'm sort of all over the place. I don't listen to much harder than Green Day.
Q: Why did you make the books?
AQ: Which books?
QA: All of them.
A: I am a daydreamer. The daydreams eventually got cooler so I wanted to share them. The stories stuck in my head - it's a playground in my mind. They were like a movie in my head.
Q: What are the names of the other Beyonders books?
A: Book two comes out next March and will be called Seeds of Rebellion. (Maybe because of the seed/plant people, ya think?) The third book will come out the following March and will be called Prophecy...something...
Q: What books do you recommend?
A: Holes, Ender's Game, Lord of the Rings, The Chronicles of Narnia. Narnia is the reason I became a reader. (Score for Narnia!)
Q: Where did you get the ideas for your books?
A: The idea for Pingo came because I did have an imaginary friend when I was younger. Why did I stop having it though? Fablehaven came from a Connecticut house surrounded by trees. What if there were magical creatures living in the woods? When I was in fifth grade I was in a club that explored the town -trespassing. There was also an old fashioned candy shop. The Candy Shop Wars came from a what-if daydream about these things. Beyonders has a Narnia type other world. I was at the Hoggle Zoo looking at a hippo and thought would be an interesting way to get there.
Q: Is the food in Fablehaven based on your favorite food?
A: I like lots of food. I like to eat. I won a pudding eating contest once. That was the only medal I've ever won. Beyonders has a big feast called the Eternal Feast. That made me hungry when I wrote it.
Q: Will you ever return to Fablehaven? (The person meant to writing the books, not returning to the place. At least I think that's what he meant...)
A: I might someday. Maybe in three to four years, possibly a second series with many of the same characters. I'm not promising for sure. The second Candy Shop War is coming out the second half of next year (Fall). It's called The Arcade Catastrophe.

Q: What is your advice to writers?
A: (PowerPoint slide)
5 Secrets
1) Have lots of experiences
Be a good observer
Learn to see something and put it into words
Write details down in journals
2) Exercise your imagination and create stories
You will get better over time
3) Read a lot!
Pay attention to how your favorite authors write
4) Get feedback
Find the weeknesses in your writing and improve
5) Find a publisher and never give up!
It is like slamming your head into a brick wall
Whew! That was a lot! After the lecture was over, Brandon mull secreted away into a nearby room to await the impending book signings. To make the autograph session go smoothly, the library organized groups to go in order based on when they initially entered the ballroom. So I was in the first group! He signed my copy of Beyonders and I was on my way! Actually, his father was selling specially made Beyonder T-shirts to raise money for Alzheimer's patients (because one of Brandon's grandfathers died from it and one of his grandmothers is currently struggling with it) so I bought one (I am saving it for a later date...). I also snagged (with permission) a now-useless-except-as-a-bookmark ticket before I left. Then I was done. I walked home and blabbed all about my wonderful evening to my (very patient) husband. 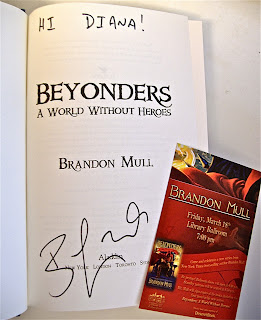 THE END
(sorry for the lack of interesting links. It just would have driven me crazy to deal with them)