This was a really fun experience. I arrived at the Orem Costco about 45 minutes before the time Ally Condie (author of Matched) was scheduled to begin signing. I wasn't sure if there'd be a line or not! She is a New York Times bestseller after all. There was no line when I arrived (happy for me, but sad that not more people knew about the event) but one definitely grew as I was waiting. One lady walked by as I was trying to select a copy (I already had a copy of the book -I brought it with me- but Costco was selling them for such a discount! I decided that I should buy another one for her to sign, then do something special with it later!) of Matched that had a nice dust jacket (it was difficult. I guess that is a drawback to bulk/pallet stores at times) and asked me if I was the author (perhaps this is foreshadowing)!
Other ladies wheeled by with their carts and kids and noticed me standing, waiting, anticipating. They asked about the book and the author and I said yes! and yes! So they got in line. I need to mention here that I was not doing this sales pitch alone the whole time. A nice girl named, Manda (ha! I remembered her name!), who is also a BYU student, eventually became the second person in line and promoted Matched along side me. We chatted a little and I fell in like with her (yes, I just said that). I hope someday to see her again (and recognize her. That would be key).
Finally it was time. Actually Ally Condie came to sit at her signing table two minutes before the time. She's that great. But let me tell you more. I like Ally Condie a lot. I'm not quite sure why, it's not like I know her personally, but there is some quality to her that appeals to me (in a nice way, not a wierd one. I have not become an Ally Condie stalker). To me, she comes across as very down-to-earth and approachable, modest, kind, and not obtuse (can I use that word here?). There is a peacefulness about her, I think. Perhaps the seed of this perception started simply from reading a little bit about her on her website, but after seeing her, after coming home and relating the experience to my husband, I realized that I think she is plain awesome (for those reasons listed above). What can I say? It's hard to explain. You understand. Maybe Ally Condie will be my writing star (I mean the one whom I will look up to and daydream that one day a quote of praise from her will adorn the back cover of my first YA book). So, coming back from the clouds now, I will finish the account. 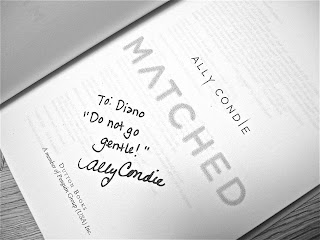 Ally Condie came and said, "I have never had a line before". That made me feel special. And I said, "Well, here we are!" As she was signing my original copy of the book, I was answering the question she asked of the name of my book blog (because I had asked if it was all right for her just to sign her name to the newer book so that I could do something special with it later -on this blog!). I think this must have thrown her off, combined with the fact that she had just sat down and that there had actually been a line waiting for her (and why not, I say? She deserves it. She's local and she's famous). Also, as I'm sure has happened to you as it has to me, one's mind sometimes tends to jump ahead of one's writing hand and implants future letters in the midst of the present ones. Dear Ally Condie had too many "O's" fighting for her attention and accidentally put one in place of the "a" at the end of my name (as you can see). No one caught this at the time though and honestly, I'm okay with it. It's funny and adds character to my book (I like it, so there). After she signed my two copies, Manda kindly took a photograph of me and Ally at the table. I was totally in the presence of a famous person. I was giddy the whole way home. Ally, you rock! 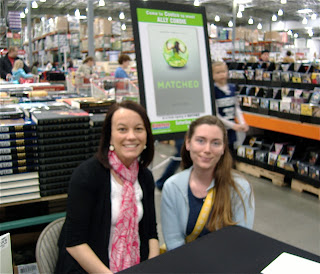 Now a little about her books: Ally Condie's fame right now in the national market is for Matched, the first in a distopian romance, break-out (like...the main character breaking out of herself and her society, etc.) trilogy. Crossed, the second book will be released on November 1st of this year. I have this book on pre-order already! The writing style in Matched was very clear and crisp. It moved along at a good pace and definitely left me wanting more (like pizza rolls or sliding down a snowy hill). Prior to Matched, she wrote five books, published through the LDS company Deseret Book.
If you would like to meet Ally Condie she will be signing books at the University Mall Deseret Book as part of the Ladie's Night event THIS Saturday, April 2nd from 6:00 PM - 8:00 PM. She will also be at the BYU Festival of Books, June 4th on BYU campus and speaking at the Orem Public Library, June 21st at 2:00 PM as part of the Teen Reading Program. (here is a link to her events page)

And the book trailer! Because we can!
Posted by Diana